This follow-up to their ferocious debut ‘Unrelenting Fucking Hatred’ will be released on the Season of Mist Underground Activists division on July 18th and is now available for pre-order at our new e-shop. Artwork and tracklist can be viewed below: 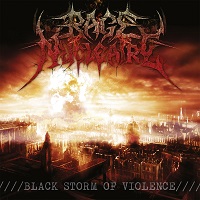 Urgent re-evaluation of case study ADL 1107-RN6 on subject: RAGE NUCLÉAIRE. Subject massively escalates all violently homicidal, suicidal, genocidal and vindictive behavior patterns with new revelation of murderous intent under the tell-tale headline “Black Storm of Violence”. It has already been established that Subject was never actually born. Instead, Subject’s component parts (please refer to Component Parts listing below), including former CRYPTOPSY figurehead Lord Worm, were assembled by Alvater, sometime in AD 2000, for the purpose of directing their aggression outwards, which came to fruition with their debut “Unrelenting Fucking Hatred”. Subject still claims to be under influences ranging from early EMPEROR and IMMORTAL, to ANAAL NATHRAKH and MYSTICUM. There are most certainly others, but these are not named. Subject’s problems derive from primary including cultic practise (“Ritual Murder”) and flies. Secondary obsessions include bloody massacres (“A Sino‐American Chainsaw War”) and swine. Subject feels an especially virulent loathing for all humanity. A cognitive-behavioral analysis concludes that Subject’s expressional proclivities include bonesaw guitars, punishing rhythms, bombastic keyboards, revoltingly inhuman vocals, and an orgiastic array of ghastly samples. A new diagnosis reveals an increase of Subject’s aggressive state of fury. Warning: RAGE NUCLÉAIRE remains extremely dangerous and harmful to others. Approach “Black Storm of Violence” only with greatest caution and respect!