SVART RECORDS announces December 5th as the international release date for RATTUS‘ brand-new Turta album. Ever since 1980’s privately pressed Khomeini Rock EP, RATTUS have been a driving force in the Finnish punk scene and largely responsible – along with Kaaos and Terveet Kädet – for bringing international renown to their particular subgenre. After spending the ’90s in oblivion, the band re-formed in 2003 and released a self-titled album in 2005, which, even though the band had released a notable amount of material on 12″ and 7″ wax in their heyday, was actually their first proper album.

The year 2013 sees the band back in full swing, with new vocalist Jopo Rantanen injecting some fresh blood into the hardcore power-trio. The band have recently completed long tours in North and South America and spent the summer recording their new LP, entitled Turta (English: “Numb”). SVART RECORDS, who recently reissued the band’s classic 12″ EPs WC räjähtää and Uskonto on vaara, continue working with the band and bring the new 14-track platter to the world on December 5th. The LP’s striking cover art was created by Irish artist Sean Fitzgerald. A sampler of RATTUS‘ Turta can be heard HERE, and its cover and tracklisting are as follows: 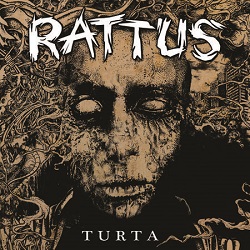