Pandora’s Box Booking presents Raw In Sect. Having signed a contract with Aural Music, Wormholedeath, the band has just completed the recording of their first full length album entitled Red Flows, consisted by 11 songs. Also, Raw In Sect are interested in participating in worldwide tours and festivals. 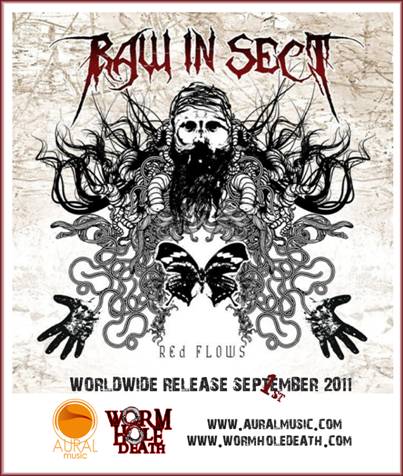 Raw In Sect were formed in 2005 and after several line- up changes the band’s members now, are Kostas Diamandis (Vocals, Guitars), Jim Alexiou (Drums), Bill Kranos (Guitars) and George Vasilopoulos (Bass, Backing Vocals).
In 2007 they released a three song self-titled demo called “Demo 2007”, which received excellent reviews in magazines and webzines around the world putting the band’s trademark in the underground metal community. They have supported well known bands of the international metal scene in gigs all over Greece, which made their reputation grow even more.

In 2010 the band completed the recording of their first full length album called “Red Flows“. It is consisted by 11 songs and combines the speed of thrash, the power of groove and the atmosphere of progressive metal. They signed a contract with Aural Music, Wormholedeath which will release their music worldwide (digital and CD). An official video clip will be released in mid-July 2011.

Raw In Sect are currently aiming to deliver “Red Flows” to the metal masses. Their deal with the renown Aural Music, Wormholedeath is their opportunity to reach further audiences worldwide.
Raw In Sect has been announced Demo of the Month at Greek Metal Hammer 2 times.
A European tour is scheduled already in September 2011 for three shows with the well known German band Suidakra in Ireland, in addition to six other live shows in Scotland and England.
Also, the band has been touring all over Greece since the beginning of this season.
If you are interested, take a look at the band’s official myspace page.
www.myspace.com/rawinsect