Metal Mind Productions presents the exclusive re-issue of the third studio album by Crack Up – “Heads Will Roll”. This German band represents the rare genre of death’n’roll – a fascinating combination of death metal brutality with the melodic rock’n’roll approach. Over the years, the band managed to release four full-length albums, with each making a huge step in their musical evolution. “Heads Will Roll” is considered as their strongest effort, bringing out the best of Crack Up’s significant style….

The band’s history dates back to January 1992, when three musicians from Hünxe, North Rhine-Westphalia, Germany – Tim Schnetgöke (bass/vocals), Dirk Oschatz (guitar) and Frank Schlinkert (drums) – decided to join forces as Rotting Misery. Later that year they released their debut six-track demo “Endless Coma”, limited to only 100 copies. At that time the group was mainly influenced by old-school death metal and that was the music they played. This changed in 1993, when Entombed released their cult classic “Wolverine Blues”, giving birth to a new, fascinating musical genre – death’n’roll. Inspired by the groovy mixture of death metal and traditional rock’n’roll, the trio forming Rotting Misery changed their name to Crack Up and in 1994 released a five-track demo “Forsaken Dreams”, presenting a new approach towards their earlier material. The demo caught the attention of Corrossion Records and on April 1st, 1996, Crack Up’s debut LP – “Blood is Life” – saw the light of day. The album proved to be quite successful and the band was soon noticed by yet another label – the acclaimed Nuclear Blast Records. After securing the deal, the group began working on their second opus. “From the Ground” was released on April 4th, 1997, ultimately shaping the band’s style. Whereas “Blood is Life” was still closer to old-school death metal than anything else, “From the Ground” showcased the band’s new direction towards pure death’n’roll madness.
In 1998 Crack Up released their third LP entitled “Heads Will Roll”, which is considered as the group’s most successful offering in their entire discography, highly praised for its strong Black Sabbath feel, the sludgy heaviness and catchy hooks. Unfortunately, Nuclear Blast was not impressed by the sales and eventually dropped the band. Crack Up signed over to Moonstorm Records, where they released two more LPs – “Dead End Run” (2000) and “Buttoxin’ Bloom” (2002). In between those releases, the group also contributed two songs for a split with The Now Noise!, which hit the stores in 2001 thanks to Wanker Records.“Buttoxin’ Bloom” turned out to be Crack Up’s last offering – the group called it quits soon after the album was released.

This exclusive re-issue of “Heads Will Roll” brings back one of the most underrated death’n’roll bands in the history of the genre. If you’re looking for a ballsy, catchy, straight-forward metal beating, look no further – Crack Up is your perfect pick. New digipak edition of” Heads Will Roll” is limited to numbered 2000 copies. The album is remastered using tube technology, digitally edited on a golden disc. The release date is scheduled for March, 6th in Europe and May, 8th in USA (via MVD).

Crack Up
“Heads Will Roll” (remastered) 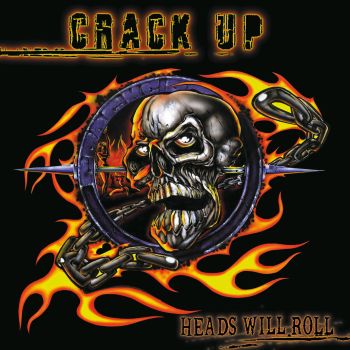