The video for READY, SET, FALL’s brand new single“Deceiving Lights” can be found now on our Youtube channel! The video was directed by Pavel Trebukhin.

“Deceiving Lights” is the first new single off the band’s forthcoming new album and Lifeforce Records debut “Memento”,which is set to be released on February 24th in Europe and on March 4th in North America! 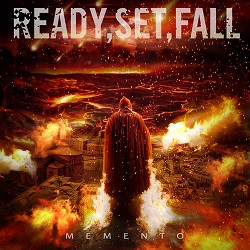 If you are interested in outstanding melodies, striking choruses and a modern-style heavy sound, you have to listen to READY,SET,FALL. This Italian band combines Swedish melodic death with American metalcore and a strong preference for agile variability. “Memento” marks the first full length album and LIFEFORCE RECORDS debut for this band which came to be in Genoa in 2010.

Some of the READY,SET,FALL members have roots within the (pop) punk genre (Where Everything is, The Last Banned). Others paid their dues being part of metalcore and metal-acts such as Blood, Sweat And No Tears, Aspasia, and Living Corpse. With forming READY,SET,FALL the Italians brought together their wide range of influences and predilections for the best elements of the Scandinavian and American heavy music scene.

Listening to “Memento” you cannot avoid to think of Soilwork, In Flames, Killswitch Engage, or All That Remains. This is exactly what READY,SET,FALL want to achieve, without just copying those established acts. The quintet is driven by its internalization of modern-style metal, being played without any boundaries or restrictions. Enjoy!!