The Final Solution; The Final Rebellion from Arizona Death Metal Unit REIGN OF VENGEANCE will be released March 19th on Synister Empire Records and is crafted in the band’s new-school, horror-oriented, death metal format.  The new EP features musicians of the already proven and established top tier and Brutal Elite.

Unlike Disemboweling Swine, REIGN OF VENGEANCE‘s previous release, The Final Solution; The Final Rebellion is a concept EP. Since the release of the last album, front man Marshall “fucking” Beck has plunged himself into the systems and studies of the “Illumed.”  He has grown to know their aims, their religion, and the goals of its sects.  He has been enlightened, having accepted and having realized that the All Seeing Eye controls this realm.  He has come to understand that with its guidance and assistance the rewards for those that abide by its will are Many. With the age of Osiris and Isis ended, the New World Age (Order) of Horus shall bring forth a world of peace that shall last throughout the remaining Aeons of time.  The second form of Atlantis shall rise forth and bring with it ONLY the enlightened and illuminated individuals.

However, with every revolution there is always ascension. Therefore, in order for ITS quest for world peace to be completed there must first be a massive internment and conflagration/decontamination of the flesh from those that refuse ITS Faith. REIGN OF VENGEANCE‘s The Final Solution; The Final Rebellion focuses on the cause and unraveling of this conflict.  The EP’s storyline moves from start to finish.  Each song offers up a different piece and perspective of the portrayed conflict as it is witnessed through the eyes of the common tiers, the Occult Elite/Fraternal Orders, and The Master.  But, do not worry common civilians; this EP is all just a work of fiction…. Sleep well.

A video preview of The Final Solution; The Final Rebellion has been posted at this location.

1. Fuck The Recession ; Kill Those That Caused It
2. Amassing Towards Truth
3. The Master’s Summons
4. The Grande Hecatomb
5. The Final Rebellion
{6. The New Era (Aeon)}* Elitist Package Only

“Elitist Packages” (pictured below) can be purchased by contacting the band and its members directly. Only 13 will ever be issued in order to commemorate the original bloodlines. This package includes a 6th song, “The New Era (Aeon).” This song offers down an entirely different conclusion to the publicly released version. 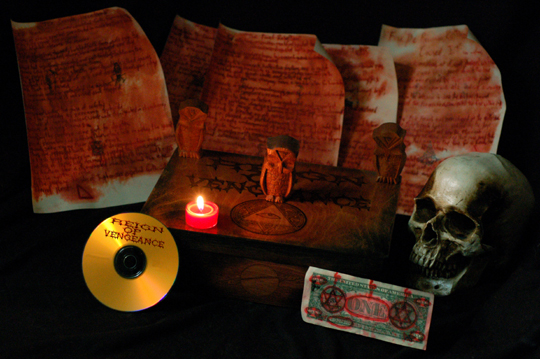 Marshall “fucking” Beck: Has 10 years of both professional and informal vocal training. He has shared the stage and recorded music with countless professional and world re-known Metal musicians. He has also booked over 450 Metal shows to date for other Metal bands of all tiers throughout the United States. Marshall prides himself in being an Elitist- an individual that strives for strength, education, intelligence, influence, and power through a collective of one’s self and one’s exoteric as well as esoteric allies.

Tim Gibson: A singer, songwriter, and guitarist from Wisconsin. Tim has written and toured with many major label acts in a wide variety of genres. He is currently allied with (sponsored by): DiMarzio, Maxon Pedals, Morley Pedals, Ebtech Audio, Dava Picks, Randall Amplifiers, and Laguna Guitars. Tim is a frequent clinician, guitar instructor both online and in person, as well as an instructional guitar author who is always ready to add to his list of accomplishments. Tim is also currently working on the soundtrack for a horror film that is scheduled for mass distribution that will be released in 2013.

Doug Williams: The original bassist for Cephalic Carnage and Origin. He has played bass for over 30 years. He was instrumental in the writing process for the music of both bands and therefore is a Grindcore/Death Metal pioneer. Doug’s technique and style has been described countless times world- wide as a “Brutal, Pounding, Armored Assault”. He has no mercy or empathy towards any other musicians or bands, this stems from the psychology of being a combat seen decorated Army Veteran. With Doug’s experience and knowledge for both music and combat REIGN OF VENGEANCE is made an even more BRUTAL force of power both on and off of the stage.

James Applegate: A prominent session drummer. James is able to play a variety of music including jazz, psychobilly, pop rock, and of the course the most important- extremely Crushing and BRUTAL Death fucking Metal (both old and New School). James is currently enrolled at Berklee College of Music in Boston. Although James Applegate is also a serious actor, having appeared in many theatrics, he publicly promises that there will be “no acting” when he delivers the merciless and beating brutality while sitting on the drum throne for REIGN OF VENGEANCE.