Shadow Kingdom Records has released the latest in a string of brilliant Manilla Road reissues –Mystification.

Manilla Road‘s sixth full-length is the last of what many longtime fans consider as their most classic period. Albums Crystal Logic, Open the Gates, The Deluge and Mystification are considered by many to be the bands best years. Even though they’re one of the very few long time running Heavy Metal bands that are still putting out great records, those four albums are the golden years.Mystification marks Manilla Road’s first foray into the realm of Thrash Metal. The band has played with faster tempos on previous album, but this is a record that delivers an intensity comparable to early Slayer. Manilla Road mainman Mark Shelton proves himself to be one of Heavy Metal’s most skilled songwriters with this flawless mix of classic and thrash metal.

This reissue is noteworthy for being the first edition of Mystification to be released on CD in the original song order along with the original mixing and mastering. This will be a huge treat for fans that have never heard the album this way because the re-issue done in the year 2000, was mixed and mastered differently along with the track order switched around. You’ll finally be able to hear the way it was originally was back in 1987! 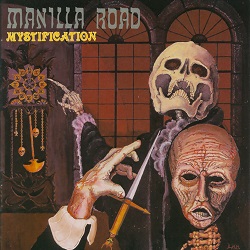 Order Mystification and other MANILLA ROAD reissues at: store.shadowkingdomrecords.com