REVELATION’S HAMMER reveals the last details about their upcoming self-titled debut album. The album’s release date is June 3rd, 2013 and will be released and distributed worldwide through My Kingdom Music.
Here’s a preview of the cover art and the definitive tracklist: 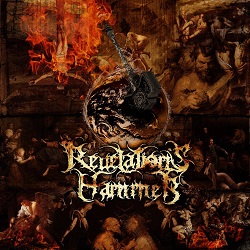 The throat and strings is managed by the band’s mastermind ACCUSER, while their heavy battery is performed by MYRVOLL from Norwegian NIDINGR. The album is mixed by Børge Finstad at infamous Toproom Studio (MAYHEM, BORKNAGAR) and mastered by legendary Peter In de Betou (WATAIN, DIMMU BORGIR, DARK FUNERAL). EXILIS from TROLL contributes as a guest musician on some of the tracks. The artwork is put together by Portuguese Ricardo Fernandes and is a truly amazing collage built upon a carefully chosen collection of (anti)religious paintings that reflects the band’s conception.

The band’s mastermind ACCUSER describes the album: “I would define “Revelation’s Hammer” as a quite dark and powerful record built on pretty epic song structures. The album reflects my development as a musician throughout the years. It sure means a lot to me, considering all the time and energy I’ve spent on it. The lyrics are in both English and Norwegian, and I think of each of the songs as very personal, yet the album as a whole. I am really looking forward to our release on June 3rd, 2013. Additionally, I’m finally able to continue on the writing of our next opus.”

For fans of EMPEROR, DARK FUNERAL and WATAIN. The album is scheduled for release on June 3rd, 2013 through MY KINGDOM MUSIC.

Hot News: Norwegian Revelation’s Hammer signs a record deal with My Kingdom Music for the release of their self titled debut album