FDA Rekotz has officially unleashed hell in the form of Hymns of Ghastly Horror. The fourth album from Swedish cult band REVOLTING is now available on CD and digital formats.  To celebrate the release of the album, NefariousRealms.com has posted an exclusive premier of the track “Prey to Katahdin.” Visit this location for the stream.

Check out www.FDA-Rekotz.com for ordering information.

On their newest album, REVOLTING offers the finest in classic, yet distinct Swedish Death Metal.  Specifically, REVOLTING returns with an album most demonstrative of their knack for creating those unforgettable necro-melodies, crusty grooves, and unmitigated brute force that has defined their songwriting development to date. The nine tracks of Hymns of Ghastly Horror will enter through the auditory canals and lodge in the brain like tumors! Vinyl treatment for this release is coming on November 16th. A definite recommendation for fans of EDGE OF SANITY, DISMEMBER, and ENTRAILS. 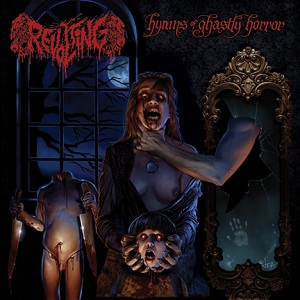 REVOLTING is the new band from Rogga Johansson (Paganizer, Ribspreader, The Grotesquery, Demiurg, Putrevore) which is dedicated to the HORROR/GORE films from the 1980’s! With today’s modern horror sucking beyond redemption and death metal being plagued by rap, emo, and fake boring “brutality”, Revolting felt it was time to do a truly PURE and ugly, rotting, putrid Death Metal band for the love of it and to get back to the basics of what all of thismadness is about anyway!