Comments the band on the results: “Bloodlines is HOWL 2.0/HOWL on steroids/the bigger, heavier album. We took our signature sound and pushed it to the next level. This is a metal record influenced by doom, rather than vice versa. There’s more aggression, more extremes, it’s harder-hitting. Zeuss really helped us capture the sound we wanted, the way we truly sound. Bloodlines is huge, brutal, monstrous!”

Bloodlines is set for release via Relapse Records April 30, 2013. 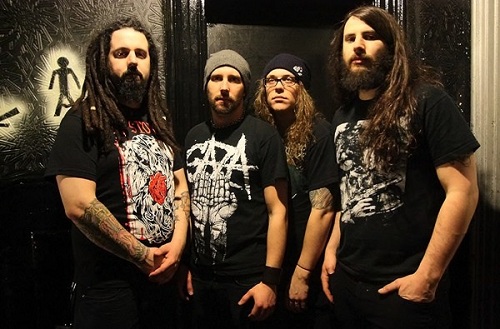 Commended for their distinct brand of “furious, bone-crushing, head-splitting doom” by MetalSucks, and their “huge riffs, excellent tone and an attitude not usually seen in bands with this much groove” by Crustcake, HOWL unleashed their Full Of Hell debut to unsuspecting ears in 2010. Gushed About.com in a near perfect rating of the record: “Full Of Hell isn’t just one of the best metal debuts of the year. It’s likely to be one of the best metal albums of the year.”