RIVAL SONS recently finished recording their highly-anticipated new album, which is due to be released on Earache Records in late August.

The band recorded the as-yet untitled follow-up to their 2011 breakthrough album, PRESSURE & TIME, with Grammy-nominated producer DAVE COBB (JAMIE JOHNSON, SHOOTER JENNINGS) and Grammy-winning engineer VANCE POWELL (JACK WHITE, THE WHITE STRIPES, KINGS OF LEON) in Nashville, Tennesee, where they worked with some of the exact equipment used by the likes of ELVIS PRESLEY and BUDDY HOLLY at the legendary Sun Studio. 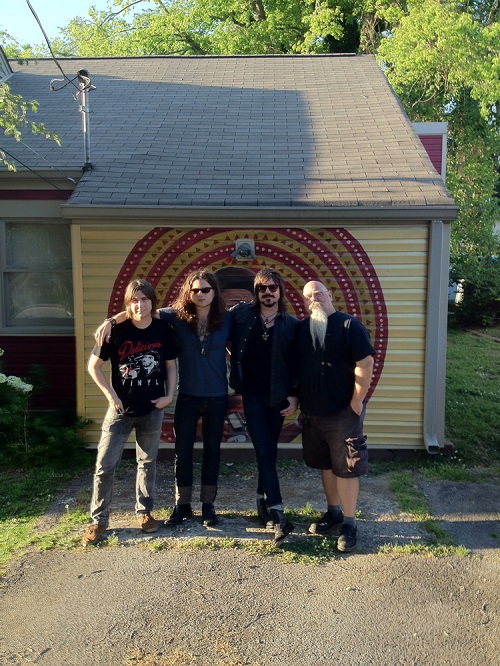 See a photo of the band recording in the studio at http://earacherecords.com/myspace/rs_studio_6.jpg

“The making of the new album could be compared to a hurricane – it started off with a cool breeze, then quickly turned into raging winds and chaos, to being a tranquil calm in the eye of the storm for a couple of days, then to pure destruction, and then finishing with the most beautiful rainbow you’ve ever seen when it was completed!

“We recorded the album through mainly gear from the ’50s and ’60s – all old American tube stuff augmented by a vintage 1970s API console, all live with lotsa attitude and bleed.  We even wrangled up the original mono ampex slap tape machine from Sun Studios from Memphis and the bass DI was from the Quanset Hut in Nashville where it had been used on Buddy Holly, Elvis, even Patsy Cline.”

“A great combination of familiar sounds presented in a completely new way.  It was great working with them.”

“One of the really great things about David is his complete commitment to his gear obsession.  I’m pretty nerdy with my own gear for studio and stage, but Dave just takes it to a whole other level with his studio.  Compressors, pre-amps and other assorted gadgets from the most famous studios in the history of recording, including Sun Records, Decca, Capitol in Nashville etc…  This is equipment that was used by The Who, Elvis Presley etc.  Pretty incredible.  It was also great to have Vance Powell to engineer and mix, who has the same fetish for gear collecting, with a special penchant for ‘unusual and hard to get’.

“We use a lot of old equipment, but the intent isn’t to make an ‘old sounding record’…  We use that incredible equipment simply because it sounds the best.  Likewise, we’ll use a lot of the old recording techniques, like distant-micing the drums, a la Glen Johns, using old huge analog plate reverbs, distant-micing on the guitars, and simply tracking everything together live in the same room.

“I used my live guitars on the album: a ’62 Fender Jazz Master, a ’65 Gibson non-reverse Firebird V, and a custom historic Firebird VII, as well as some of David’s guitar collection too, including a ’60 Gibson 335 with Bigsby, a Gretsch White Penguin, a ’52 Gibby Les Paul conversion, and an early ’60s Harmony Rocket, a la The Kinks!  A few of the main amps were an old ’40s Supro with a little 6” speaker, a Silvertone 2×12, and a VOX Berkley.  Also many cool, old and new fuzz boxes, and a ton of other pedals.  A cornucopia of fuzz rock colors and flavors.

“It was a very ‘chew you up and spit you out’ kind of process…  Working with immediate decisions and performances day after day.  It becomes even more intense when you’re using a lot of first takes.  For me, it’s a mission to give the listener something as pure, honest and unadulterated as possible, which seemingly is the antithesis to the trend in mainstream music right now.  The goal (tonally and song-wise) was to really spread our wings and reflect the past year…  Playing live every night, doing a lot of improvising and exploring musically, and to open up some new territory, topically and sonically.”

RIVAL SONS kick off a European tour today, Monday, 28th May at the Pinkpop festival in the Netherlands.  Don’t miss them on tour at the following shows:

View the tour flyer at http://earacherecords.com/myspace/rivalsons_tour2012.jpg

RIVAL SONS have just released a new music video for the track, “Face of Light“.  Watch the video now at http://youtu.be/RXHI_P6LVPY