RIVAL SONS have posted a video introduction to their forthcoming new album HEAD DOWN, released this Friday 14th September in Europe and Monday 17th in the UK. (The album will also be released Tuesday 18th September on Itunes in the USA). In the video the band air clips of tracks from the album, talk about their recording experience, their inspiration, and how HEAD DOWN was conceived and written.

Check out the video here: http://www.youtube.com/watch?v=p8J_ULtxK20

HEAD DOWN was written and recorded in only 20 days at Honey Pye studios in Nashville in February this year with Grammy-nominated producer DAVE COBB (JAMIE JOHNSON, SHOOTER JENNINGS) and Grammy-winning engineer VANCE POWELL (JACK WHITE, THE WHITE STRIPES, KINGS OF LEON).

RIVAL SONS have just released a new music video for the first single from HEAD DOWN, titled “Keep On Swinging“.

Watch the video now at http://youtu.be/-ijOlAR3zs8

HEAD DOWN is the follow up to the Long Beach band’s album “Pressure & Time” released last year.

HEAD DOWN is available to pre-order now on CD, digi-sleeve CD and limited edition audiophile vinyl. A special stencil edition created by the band themselves is also available exclusively from the Earache Webstore. Pre-order the album now in Europe at http://bit.ly/jucwYJ or in North America athttp://bit.ly/mtaFfm

HEAD DOWN is also available to pre-order on iTunes at http://bit.ly/KMbFhR

Don’t miss RIVAL SONS on tour in Europe at the following shows: (most UK shows only £10) 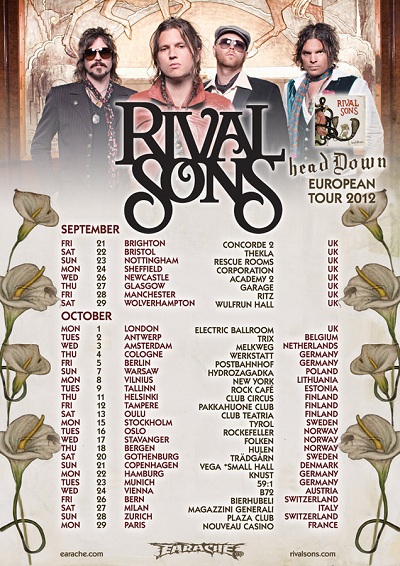 Hot News: Rival Sons – Win A Postcard Sent To You From The Band’s European Tour