RIVAL SONS have released a new music video for the track “Until the Sun Comes“, which is premiering now exclusively at NME.com.

The track is the band’s second video from their new album, HEAD DOWN, following the release of “Keep On Swinging” in September.  The video for “Until the Sun Comes” was filmed with director SIMON GESREL, who is well-known for his stop-motion work and his work with MICHEL GONDRY (THE WHITE STRIPES, BJORK).

Watch the video for “Until the Sun Comes” now on NME.com at http://www.nme.com/news/rival-sons/67582

“I really dig this video; it’s a completely new direction for us.  Filming videos can be very awkward for me, but this time I got to ride a dirt bike out in the desert where I’m most comfortable; it just felt so natural for the song.  We’re all pretty good on a bike so we just took turns doing tricks and trying to outdo each other.  We ended up with some sweet footage.  Nice.”

“The video took about six weeks to make, two weeks of prep and four weeks of animation, including three weeks of post-production.  This clip has references from Time Rider to apocalyptic science-fiction, i.e. Mad Max, especially Italian B-movies etc. like Nuovi Barbari – sometimes just the posters for these films are great inspiration!  Plus more well-known series such as Knight Rider and Street Hawk etc.

“The character and the bike were made from different toys customised and aged (about four inches).  The base of the décor is made of polystyrene covered in real sand.  The film set resembles a sand dune.  We worked with three different sets, so there were effectively three different bikes and the characters.  The set with the girl was shot in live action whereas the other travellings were in stop-motion, image by image.  We worked with a naked model covered in glycerine, then covered in sand so the sand stuck.  It was hard work despite the presence of a naked lady made of sand. 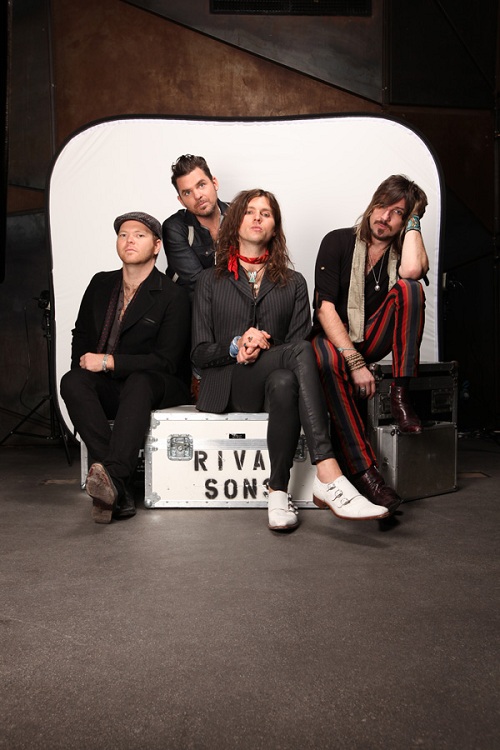 “I like playing with clichés (‘I know you’ve heard it all before…’); it allows us to be direct with formats for a short clip – at the same time I look to remain accessible.  The idea is a meeting of inspiration – a spur of the moment thing, that finishes with a sexual rapport, but I wanted it to remain a clip for everyone; people see what their age permits and it remains fun for everyone.”

Join the conversation about the video on Twitter #UntilTheSunComes

RIVAL SONS‘ new album, HEAD DOWN, is available now in Europe on jewel case CD, digi-sleeve CD and limited edition audiophile vinyl.  A special framed stencil edition hand-made by the band themselves is also available exclusively from the Earache Webstore.  Get the album now in Europe at http://bit.ly/jucwYJ

HEAD DOWN is also available now on iTunes at http://bit.ly/KMbFhR

HEAD DOWN is due to be released on physical formats in the USA on January 22nd, 2013, but the European import version is available now from the Earache Webstore at http://bit.ly/mtaFfm