Poland’s Progressive Rock shooting stars RIVERSIDE are now launching the first video-clip for the first single “Celebrity Touch”, off their much their much anticipated fifth studio album “Shrine Of New Generation Slaves”.

The video clip was directed by Mateusz Winkiel of Mania Studio and its premiere can be watched on the IOM YouTube-Channel here: http://youtu.be/HAqU-RDnYyY

“Shrine Of New Generation Slaves” will be released via InsideOutMusic internationally on the following dates:

“SONGS” is receiving phenomenal reactions from media and among others it was recently elected “album of the month” in the 02/13 issue of Germany’s leading Prog Magazine ECLIPSED with an amazing 9/10 points review.

“Celebrity Touch”, the first single off “SONGS” was released as digital download on December 17th, 2012 in Europe with an edit-version as b-side. Get the single via Itunes here: http://itunes.apple.com/album/celebrity-touch-single/id581674878

RIVERSIDE’s Mariusz Duda comments about the video as follows:
“So here it is, our second-ever video clip and I have to admit – I’m very happy that we had the opportunity to shoot a video for the first single from the new album. “Celebrity Touch” reflects the times we live in. I think everyone has a deep need to feel important somehow, but unfortunately, this need is rarely satisfied. Of course some people do get the chance, mostly, people connected with the so-called celebrity world.  This is a story about someone who satisfied this feeling a bit too much and about the band that…chose to play away from the galleries with shitty works. This is our first cooperation with Mania Studio – very talented guys from Poland!”

Next to the standard CD and the Digital Download version, “SONGS” will also be available as limited edition Mediabook-2CD with an expanded 32-pages booklet and as Gatefold-2LP version with 180 gr. vinyl. Both those versions include 2 special “Night Session” bonus tracks.

All different physical formats are available for pre-order in Europe from the IOM webshop: www.insideoutshop.de/Search?q=shrine

The 2LP will be available everywhere on black vinyl and alternatively also as strictly limited (200x copies only!) blue-grey coloured version exclusively via the IOM webshop here: www.insideoutshop.de/Item/Riverside_-_Shrine_Of_New_Generation_Slaves_-grey-blue_2LP-/15850

The artwork for the “Shrine Of New Generation Slaves” album as well as for the “Celebrity Touch” single was designed once again by Travis Smith /www.seempieces.com, who has already worked on all the previous releases of the band as well as for artists like Avenged Sevenfold, Devin Townsend, Anathema, Nevermore or Opeth.
“SONGS” was recorded at Serakos studio in Warsaw, Poland (where the “Reality Dream” trilogy” was also tracked) with Magda Srzednicka and Robert Srzednicki. 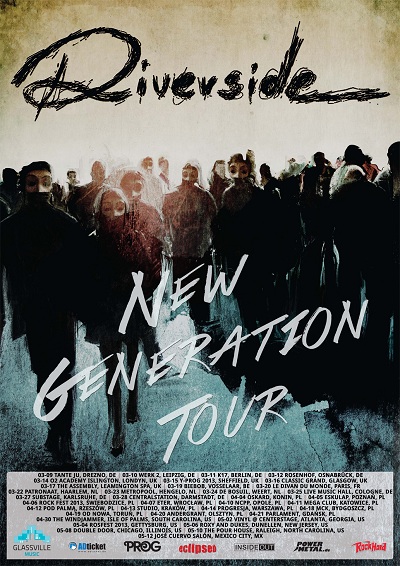 Here is a list of confirmed RIVERSIDE shows for 2013:

“Shrine Of New Generation Slaves” is the full-length follow-up to “Anno Domini High Definition“, which had
entered the sales charts in Poland at # 1 (Gold album status by now!), Germany at # 94 and The Netherlands on # 58 upon release in 2009.  In 2011, RIVERSIDE last released a special EP entitled “Memories In My Head” in order to celebrate the band’s 10th anniversary of existence.

Stay tuned for further news on RIVERSIDE in the coming days…