Poland’s Progressive Rock shooting starts RIVERSIDE have commenced working on a new, yet untitled, studio album, expected for a release around early 2013 via InsideOutMusic.

The band has now also signed a new deal with InsideOutMusic, extending the fruitful international co-operation between the parties.

RIVERSIDE checked in to comment about the newly signed deal as follows:

“We’re very pleased that we’ll keep collaborating with InsideOut/Century Media. We’ve overcome many difficulties together and we hope that the new contract, signed at the moment when we start another decade as a band, will help us to grow more, and will make us able to reach a larger number of listeners with our music. The new album is on the way. I believe it will be a new beginning for RIVERSIDE.” 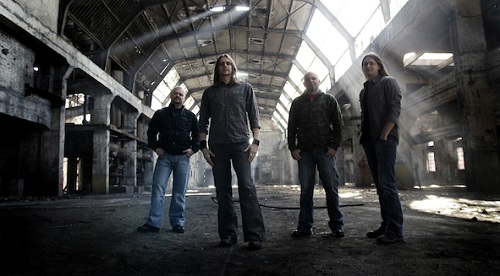 “RIVERSIDE is one of the most important bands on InsideOutMusic and in the current Progressive Rock scene. Therefore I am extremely pleased to be able to renew and continue the relationship with our friends from Poland!”

You can follow the band’s recording process of the new album by visiting their online blog here: http://www.riversideband.pl/en/news/studioreport

A video interview with the band directly from the studio can be seen here: http://www.youtube.com/watch?v=9105B_gCrF0

The upcoming album is the much anticipated full-length follow-up to the band’s latest, 4th studio album “Anno Domini High Definition“, which had entered the sales charts in Poland at # 1 (Gold album status by now!), Germany at # 94 and The Netherlands on # 58 upon release in 2009. In 2011, RIVERSIDE released a special EP entitled “Memories In My Head” in order to celebrate the band’s 10th anniversary of existence.

You can order them here: http://www.insideoutshop.de/Artist/Riverside/20863