The album will be out in january 2014 via WAR-ANTHEM RECORDS! 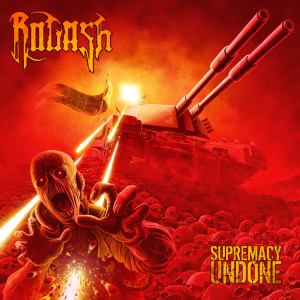 Hailing from Germany, ROGASH are five guys which dedicated their lives to the pure passion of death metal in winter 2009. After their first musical try-outs and some appearances at local underground shows ,  they released their first EP “ROGAN ERA” in 2010, which gathered a massive dose of praising feedback among the German metal community. Without having a record label or a booking agent ROGASH quickly enlarged their fanbase by playing more than “60” club shows in the last 2 years, followed by the first summer festival appearance at e.g. Chronical Moshers Open Air or Hell Inside Festival. Musically speaking, ROGASH is a band which combines typically Swedish melodic death metal sound structure, without rejecting influences from the straight forward American death metal style. Their debut album “SUPREMACY UNDONE” is set to hit the streets in Winter 2013/2014 via WAR ANTHEM RECORDS – so keep an eye if you dare!