Royal Thunder, who released their debut album CVI two weeks ago via Relapse Records, recorded an exclusive acoustic performance of “Black Water Vision” for Google Play and their accompanying Magnifier blog, which is available today via this link: http://youtu.be/GGxCvhkYB9I.

The performance and interview were recorded at SXSW and offer insight into the band’s influences as well as the history of the female-fronted band. The interview can be found on the Magnifier blog at http://magnifier.blogspot.com/2012/06/royal-thunder.html.

Free downloads of the acoustic version of “Black Water Vision” and the album version of “Whispering World” are available at both links listed above.

Royal Thunder join Valient Thorr for a five-week trek across the US kicking off this Sunday in Richmond, Va. 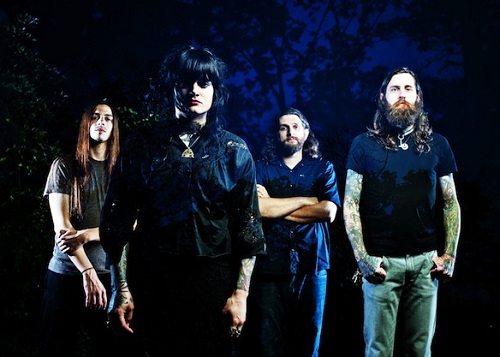 CVI has garnered a great deal of praise with Spin calling the ten-track release “a stunning breakthrough and NPR saying the album “not only builds on the promise of a great EP, but it’s also a portrait of songs that have been painstakingly lived in.” Revolver said CVI is “essential” and described the band’s offering as “a thick rock hurricane that spins soaring melodies and searing heaviness in almost every direction.” Decibel featured the album as their June 2012 lead review describing the release “as magnificently compelling rock music that’s anything but by-the-numbers” and Outburn saying the band is a “standout amongst their peers.” The album is currently streaming in its entirety at www.royalthunder.bandcamp.com.

Google Play is a digital entertainment destination featuring music, movies, books and apps used via the web and Android phones or tablets. Google Play is entirely cloud-based allowing users to use their saved content from anywhere at any time.