Commenting on the album, vocalist/bassist Shawn Riley says, “Ghostmaker represents everything we have worked towards for the past several years. When the album drops it will be obvious that this is something created by four dudes thirsty for blood, eager to silence all the critics, and to crush all the lames.” Guitarist Ryan Moll notes, “This album is our fastest, darkest, and most relentless album yet. It will contain some of the most bone-crushing, graveyard stomping, Frankenstein/Dracula/Wolfman hate-fuck riffage written thus far.” Guitarist Matt Moore adds, “Each song has its own distinct and strange aura of speed, darkness, brute strength, violence, cunning, and power. We have raised the bar and taken on musical and lyrical concepts that would drive commoners insane.”

Formed in 2002, RUMPELSTILTSKIN GRINDER had several underground releases, including a split 7-inch and a live album, before signing with Relapse. Their studio debut, Buried In the Front Yard, was released October 2005. Blabbermouth called the record, “a dynamic thrash album with roots in crossover, a musically talented cast, and loads of tongue-in-cheek cleverness.” The band would keep busy with additional split recordings, Speed N Spikes Vol. II (2008) and Urine Trouble / Nothing Defeats the Skull (2008) before getting back in to the studio for their second full length, Living for Death; Destroying the Rest also released by Relapse January 2009. The band supported Absu for a 22-date US/Canadian tour April 2009, a tour with Deceased in 2010, and have been performing regionally since. 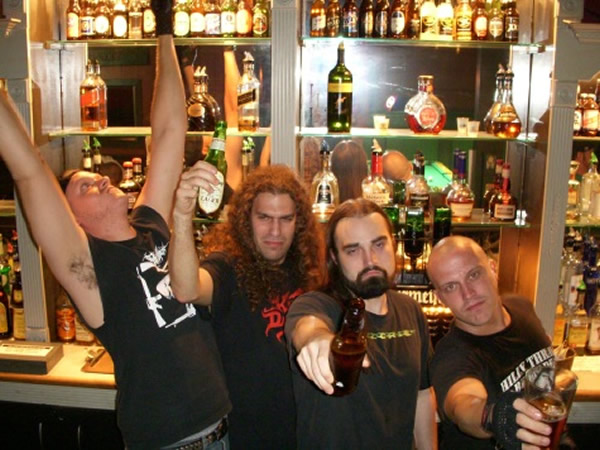