On the 16th of May, Swedish Heavy Metal band SABATON will release their new studio record called »Heroes«.

Today is the release of the first single out of »Heroes«, called »To Hell And Back«; which is available here:

Enjoy the track on a lyric video here: http://www.youtube.com/watch?v=HYWdgBtSM8s
Don’t miss the first two album trailers, which were filmed during the band’s album presentation in Stockholm, on February 22nd. They were produced and edited by David Havlena of Spark Magazine (CZ) at the Pax studio. 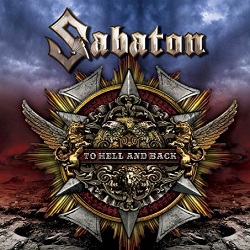 »Heroes« was recorded at Abyss Studio, along with producer Peter Tägtgren (AMORPHIS, CHILDREN OF BODOM and more), with whom SABATON already worked on their previous platinum album »Carolus Rex«.

Hot News: Sabaton – reveal video clip for ‘To Hell And Back’