Sabbath Assembly returns with their second album, Ye Are Gods, set for release on September 21 through The Ajna Offensive (for North America) and Svart Records (for Europe and the UK).

As on the critically acclaimed Restored to One debut, Ye Are Gods presents the hymns of the Process Church of the Final Judgment, a religious movement that emerged in the late 1960s as an apocalyptic shadow-side to the flower power and New Age movements.

Reaching beyond the scope of Restored to One, Ye Are Gods incorporates the ritual text and structure of the Process Church’s highest and holiest mass, the “Sabbath Assembly” liturgy from which the band is named.

Ye Are Gods is led by vocalist Jamie Myers, a veteran of Hammers of Misfortune (The Locust Years) and Wolves in the Throne Room (Diadem of 12 Stars, Malevolent Grain). Dave “Christian” Nuss remains drummer and co-producer. 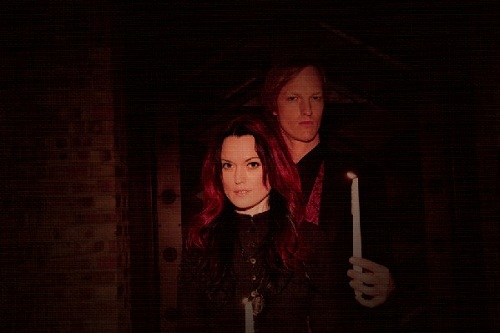 The album features Genesis P-Orridge serving the role of High Priest(ess), aka “Sacrifist,” Eyvind Kang plays viola for the liturgical “Declaration of the Gods,” and guitarist/vocalist Imaad Wasif offers a chilling rendition of the hymn “We Give Our Lives.” In addition, Timothy Wyllie, an originalProcess Church member, provides a homily from Process Church founder Robert DeGrimston’s Gods on War. Mr. Wyllie is the author of Feral House’s LOVE SEX FEAR DEATH, which offers an insider’s perspective of the Church and its true leadership.

The album offers a first-ever glimpse into the Process’s most sacred liturgical text, taking the astute listener through the mysterious Gnostic journey of the unification of Christ and Satan; the bliss of total submission to the gods Jehovah, Lucifer, Satan, and Christ; the wilds of the Apocalypse and a face-to-face encounter with the Angel of Death; and finally the moment of spiritual renewal in which the Process’s “Law of the Universe” is revealed.

The influential Process Church opened chapters in London, Europe, and across the USA, dressing in black cloaks and walking the streets with German Shepherds. To promote their controversial theology, they sold intricately-designed magazines, three of which are documented in full-color reproductions in the recently issued Propaganda and Holy Writ of the Process Church of the Final Judgment (Feral House/Ajna).

Ye Are Gods
Released by :AJNA:, US, and Svart Records, EU