Death thrashers SACRIFICIAL SLAUGHTER are confirmed to join death metal pioneers MASTER for the “North American Detonation Tour,” set to take place in March of 2013. The tour is being put together by Precision Metal Booking. For more info and updates visit www.facebook.com/PrecisionMetalBooking. Confirmed dates and cities are as follows:

Precision Metal Booking has room for one more support act. Bands interested in being a part of the North American Detonation Tour are urged to contact Steve Worley at sacrificial2000@gmail.com as soon as possible for information. Serious inquiries only. 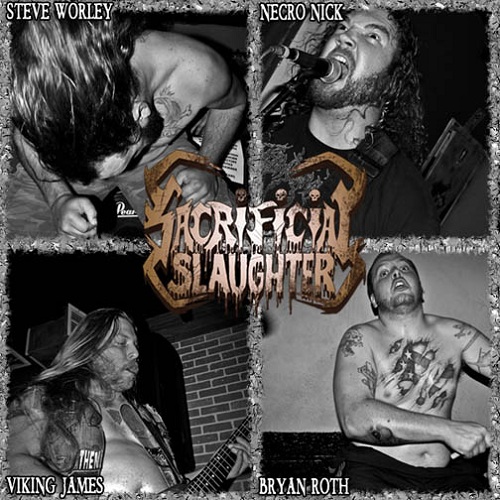 SACRIFICIAL SLAUGHTER‘s most recent offering, the American Death Thrash split with Oklahoma’s ENFUNERATION, was released last year by Horror Pain Gore Death Productions and is available at this location. 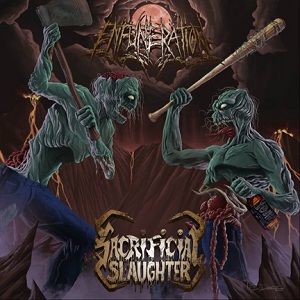 Praise for American Death Thrash:
“Two rotting zombies trying to tear each other to pieces sums up what this split is about pretty well visually. Sacrificial Slaughter and Enfuneration have teamed up to show that pure American death metal is alive and well in 2011.” – Wormwood Chronicles

Combine both bands and the album is one of the most wonderful barbaric attacks heard this year. – Ring Master Review

“The winner is the listener here because both Californians Sacrificial Slaughter and Oklahoma’s Enfuneration bring the riffs along with the bloodshed, the energy with the evisceration, and the grisly charm amidst the concussions.” – From the Dust Returned

“SACRIFICIAL SLAUGHTER play the real shit like a SLAYER / AUTOPSY hybrid virus created in a secret lab but unleashed by accident.” – Scumfeast

“The underground metal scene has much to look forward to if we can expect full-length assaults from either of these stellar bands in the near feature.” – DOA [10 Fucking Skulls]

“American, Death, Thrash… For sure one is not fooled after the play button has been pressed, for SACRIFICIAL SLAUGHTER and ENFUNERATION really do bring these words to the listener’s mind after the first notes start to drill into the brain. Being signed by Horror Pain Gore Death Productions surely means quality. Both bands really do pull it out in a pretty professional way.” – Voices from the Dark Side

Hot News: Sacrificial Slaughter And Bloodsoaked – To Join Forces For The “Hammer Of Gore” European Tour This Fall