IRON BONEHEAD PRODUCTIONS, in conspiracy with NUCLEAR WAR NOW! PRODUCTIONS, sets July 25th as the international release date for SACRIFICIO‘s self-titled debut MLP. Chained in conservationism as a strict principle, SACRIFCIO raises the banner of black metal’s first generation and reinvigorates its standards with Sacrificio. A mysterious entity comprising esteemed members of the black/death underground, SACRIFICIO‘s ancient sound resounds with a fluency only capable of being harnessed by true warriors of the occult. Sacrificio thus enraptures with a swirling sort of scuzz that equally nods to the pioneering works of early deathrash legends and the contemporaneous bestiality of elder South American climes. SACRIFICIO vociferate the sullenness and vigor of their lyrics sung in their mother tongue of Spanish, evoking the same feeling of uniqueness of the old bands from the most unexpected and darkest latitudes like Columbia, Brazil, Czechoslovakia, and Hungary, their MLP subsequently spawning a looming ruination, cloaked by a rumbling atmosphere as a pandemonium of Dante-esque splendor. Defying modern production “standards,” Sacrificio blasphemes with tube distortion and tape compression, evolving and destroying in the same manner, in the same oppressive circumstances and environment, as the very first death metal demo recordings. Truncated yet fully formed, SACRIFICIO‘s debut statement is a defiant one. 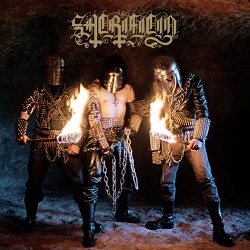