Belgian black metallers SAILLE,formed in 2009, have enteredShumcot Studios in Aartrijke (Belgium) with producer Reinier Schenk (Gorath, Fleshmould,..) to begin recording their new as yet untitled album, for a January 2013 release via Code666 records.

Commented Saille keyboardplayer Dries Gaerdelen  : “When creating our new album, I did research on and was inspired by several ancient destruction rituals. The new songs are therefore darker, faster, more aggressive and create a feeling of unease. The lyrics written by frontman Dennie Grondelaers, explore the history of those death rites. With the drums being recorded a while ago, we’ve all got a “recording state of mind” and have a feeling we’re creating more than just songs.  We’re looking forward to unleashing our creations on the audience, both on cd and live ! ” 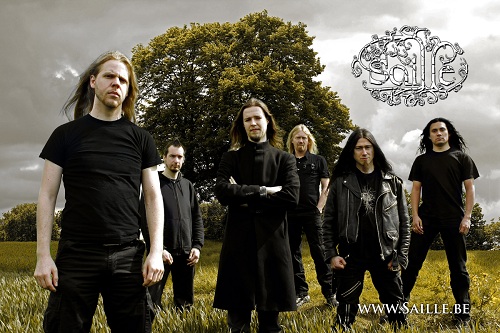 The artwork will be created by Polish digital landscape artist Michal Karcz who also developed the bands former artwork. The mastering will be done by Tom Kvålsvoll, who previously  worked with 1349, Dimmu Borgir andKeep Of Kalessin.