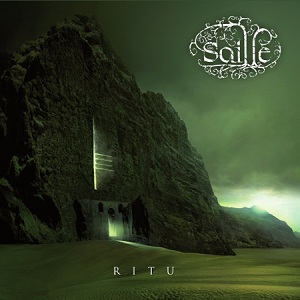 The official lyric video for “Haunter Of The Dark“, a new song from Belgian melodic black metallers SAILLE, can be seen below. The track comes from the band’s second album, “Ritu”, which will be released on January 18, 2013 via Code666 Records. The follow-up to 2011’s “Irreversible Decay” was produced and mixed by Reinier Schenk (GORATH, FLESHMOULD) and mastered by Tom Kvålsvoll (1349, DIMMU BORGIR,KEEP OF KALESSIN). Cover art comes courtesy of Polish digital landscape artist Michal Karcz.

Saille has been confirmed for one of the greatest indoor (black)metalfests of the region : Eindhoven Metal Meeting. Joining bands as Satyricon, Obituary, Taake, Dark Tranquility and many others, Saille will crush the Jägerstage of the Effenaar (Eindhoven) on Friday December 14th 2012.
37 bands will play on Eindhoven Metal Meeting, a two day festival. Complete line-up for EMM can be found here:
http://www.eindhovenmetalmeeting.nl/line-up/