Finnish black metal legends SARGEIST premiere the new track “Feeding the Crawling Shadows” on heavily trafficked tastemakers InvisibleOranges.com. The song is the title track to SARGEIST‘s massively anticipated fourth album,  Feeding the Crawling Shadows, set for international release on March 31st via W.T.C. PRODUCTIONS for the CD version, with a gatefold vinyl version to follow at a later date. More than just a quintessentially “black metal” album title, Feeding the Crawling Shadows is a veritable raison d’etre for these modern black metal legends: With faith and devotion, through ritual and necromancy, SARGEIST feed the blackest, most Satanic essence at the core of BLACK METAL and, in turn, wield its clandestine powers with sorcerous might. Hear the latest fruits of evil exclusively HERE.

But while predecessor Let the Devil In was indeed hailed far and wide as a masterpiece, the coven of SARGEIST is always lurking where no light dwells, brewing potent spells more diabolical than the last, and this solemn commitment is played out across the ten tracks that comprise Feeding the Crawling Shadows. Instantly recognizable as SARGEIST – and particular, the malign riff-majesty of the ubiquitous Shatraug (HORNA, Behexen, et. al) – here, the quartet go a concertedly rawer route, but with no sacrifice in quality. If anything, their freezing landscapes penetrate the soul that much deeper. As such, SARGEIST have once again topped themselves, delivering yet another masterpiece of purest black metal magick in Feeding the Crawling Shadows. 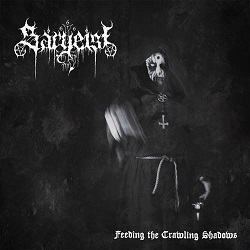 In other SARGEIST news, the band is currently on the road performing rituals across Europe. Joined by Nightbringer, Pseudogod, and Irkalian Oracle, SARGEIST are headlining the “Disciples of the Void Tour 2014,” which concludes in the following cities:

SARGEIST – Let The Devil In