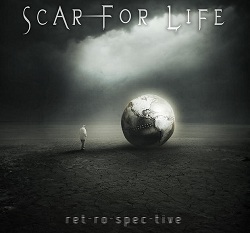 To celebrate 5 years, SCAR FOR LIFE released for free download a compilation titled RETROSPECTIVE which contains 10 tracks + 1 new instrumental song. This piece (under the same name) was again written and mixed by Alexandre Santos, but this time drums were recorded at BandHouse Studios in UK by Rómulo Herédia behind the kit for the first time in SFL, guitarist virtuoso Neil Fraser (from TEN fame) and Sérgio Faria on guitar. Also bassist extraordinaire Neil Murray (WHITESNAKE, BLACK SABBATH, THE MICHAEL SCHENKER GROUP, BRIAN MAY / QUEEN…) contributed to this theme. A video will be released very soon and was directed by Dustin Warnock.

RETROSPECTIVE can be downloaded at the band’s website wwww.scarforlife.com