There should be no more doubts: SCORPION CHILD from Austin, Texas will take the world of rock by storm!!! First cowboy county, then the U.S. – and now they infected the rest of the planet with their self-titled debut that was released by Nuclear Blast in 2013. Their unique mix of balls-out classic rock, 70s psych, krautrock and southern blues influences simply is a rush of blood to the head…

They made plenty of new friends supporting ORCHID on tour and during their headlining stint with SPIRAL ARMS last year – and they`ll kick your butts as part of the “Lords of the Riff” billing in the UK in March (sponsored by Metal Hammer UK)! Right after this, SCORPION CHILD will embark on a headlining tour throughout Europe in March and April.

“We the band, would like to thank all of our fans who attended our first headlining tour last Fall season. The response from our fans was incredible and we are counting down the days until the next! We will return to Europe in March 2014 for our second headlining tour with support from Horisont. Also don’t miss the action at HELLFEST this year, we’re planning something CRAZY! See you soon!”

Scorpion Child and drummer Shawn Alvear have decided to part ways indefinitely, and bring in former Job For A Cowboy drummer Jon Rice to take over in the percussion department.

Supporting SCORPION CHILD will be brilliant Swedes HORISONT who are sailing the seven seas of 70s heavy / psych rock and are often compared to WITCHCRAFT and GRAVEYARD. Recently they made heads turn with their third album „Time warriors“!

And then there`s JACKSON FIREBIRD from Australia! The explosive duo offers rock`n`roll with blues nuances and kill all competition with the programmatic „Cock rockin`“ that will be released on March 28 via Napalm Records. Not only do they celebrate the power of rock but at the same time invent a new genre – Cock Rock! And it won´t let you down… plenty of riffs, grooves, testosteron and balls!

Worship the riff and get your tickets at www.hardticket.eu!!! 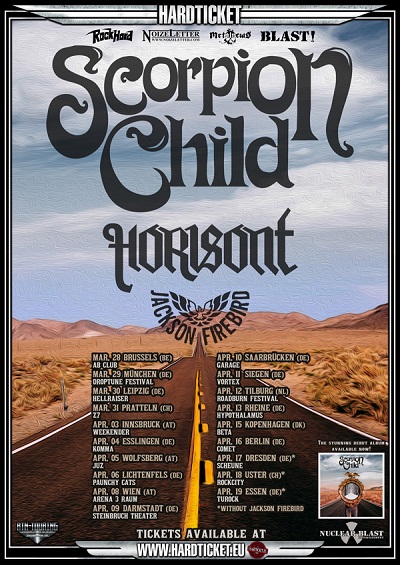