Secret Illusion announced, through the band’s Official Website the release date of their second album “Change Of Time”!

Even more, they uploaded the album’s artwork for public viewing! 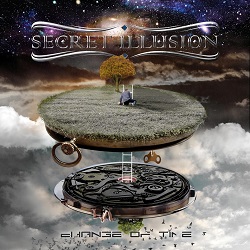 The new album will be self-released and will hit the streets on March 17th 2014, containing the following tracks: “Northern Lights”, “Born Once Again”, “Point Of No Return”, “Perfect Fantasy”, “Beauty Queen”, “Winter Poem”, “Change Of Time”, “Love Lies” and “Words Left Forgotten”.

“Due to the economic crisis that plagues us all and its impact in the music industry, we decided that this time we should take all matters, concerning all aspects of our music, in our own hands” the band states.

“Change Of Time” was produced by Nigel Foxxe and Filippos Papakyriakou and mixed/mastered by Nigel Foxxe at The Foxxe’s Lair in Athens and features the guest appearance of Spyros Lambrou’s Children’s Choir on two of the tracks!

“Change Of Time” will be available for purchase through all the web stores (Amazon, Itunes, CdBaby, etc.) and the band’s Official Website, in physical and digital form.

The amazing artwork of the album is, once more, the work of Thass Jillion.

The new video clip for the song “Born Once Again” will be available on www.youtube.com/secretillusionband in the next few days.