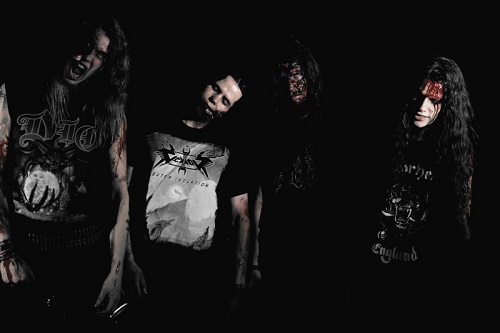 On the run up to the release of their debut album ‘Consumed‘, UK death thrashers Seprevation today release a music video for ‘Slave To The Grave‘.

Guitarist Joss Farrington comments, “The concept was to play on the themes of ‘Slave to the Grave’ and actually give the viewer the visual image of us decaying and covered in gore.”

‘Slave To The Grave‘ was shot in the bands home city of Bristol, England at RS Studios and it was directed & edited by Doug Anderson of Visceral Video with a helping hand from Janey Hayes who took care of the special FX make up. 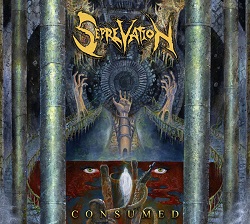 That aforementioned is just one of many descriptions made of the death/thrash maniacs. Formed in 2011 in Bristol, England; since their inception Seprevation have been quick to cause a riot, touring throughout the UK with a battery of hate filled lyrics and a sound to kick your pearly whites to dust, Seprevation are here for a reason and one reason only… to shatter and destroy.

May 10th 2014 will see the release of ‘Consumed’, the debut full length album and follow up to EP ‘Ritual Abuse’.

Joss comments on ‘Consumed’, “I think fans of ‘Ritual Abuse’ will really like it, it’s more of the same in many ways, plenty of shred and old school worship but its definitely steering in our own direction, as the writing process went on the songs became more and more diverse, songs like ‘Between Two Worlds and Dreams’ were written last and you can really hear the difference.”

“If you thought ‘Ritual Abuse’ was pretty great then buy this because it’s 100 times better, 3 words – Old School Worship.”