FOREVER PLAGUED RECORDS sets April 7th as the release date for SEPTUAGINT‘s debut MCD, Negative Void Trinity. Another prospective band from the fertile Greek black metal scene, SEPTUAGINT play a fast black metal style that knows when to pace itself – not much different from some bands under the moniker of orthodox BM, but with their own Mediterranean flair. Lyrically, SEPTUAGINT are very religious, but the duo also distance themselves, to a certain degree, from being absorbed completely in any particular theological train of thought. Since 2006, Codex has been trying to compile his work to no avail. It’s taken seven years to get all his work together for their debut EP, Negative Void Trinity, which is being proudly released by FOREVER PLAGUED. Highly recommended to anyone who is following the Greek scene, firstly, then of course, bands like of Aosoth, Ascension, Avichi, Acherontas, Nightbringer, etc. The first taste of SEPTUAGINT can be heard HERE, in a pre-release teaser video. 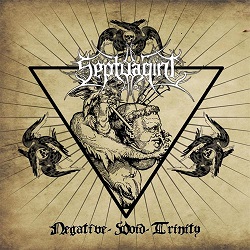