Today, esteemed doom authority TheObelisk.net premieres SEREMONIA‘s “Antikristus 666,” the second track to be premiered off the Finnish band’s self-titled debut album, set for international release through SVART RECORDS on September 14th. SEREMONIA‘s “Antikristus 666” can be streamed in its entirety here: http://theobelisk.net/obelisk/2012/09/05/seremonia-antikristus-666-premiere/. As Seremonia nears release next week, the album has been picking up steam with the worldwide press, as the tastemaking BrooklynVegan.com last week premiered SEREMONIA‘s “Lusiferin Kaarmeet” here: http://www.brooklynvegan.com/archives/2012/08/seremonia_prepa.html.

There are a few bands from Finland that play some sort of old-school psychedelic hard rock, but none of them sing in their native language. The debut album by SEREMONIA (Finnish for “ceremony”) features fuzz-laden guitar riffage, out-of-control drum grooves, spacey synthscapes, eerily beautiful female vocals, and esoteric and apocalyptic lyrics sung in Finnish.

SEREMONIA‘s hard rocking is influenced by the muddy sounds of Anglo-American proto metal, the weirdly fuzzy grooves of Latin psychedelic rock, the experimental ideas of Finnish progressive rock, and universal D.I.Y. punk rock ethics. The guitar riffs are doomy and the lyrics are dark, but SEREMONIA rolls on with an uplifting spirit. The band plays with uncontrollable abandon, furiously stumbling through the songs. Upon the wild fuzz jams, vocalist Noora Federley delivers the lyrics in a chillingly cold-blooded manner. Boring modern production standards don’t seem to interest SEREMONIA at all. The album is a part of a great and age-old lineage of eccentric rock ‘n’ roll.

Although SEREMONIA‘s music is informed by the heavy rock of the past decades, it is music for these apocalyptic times. Visions of environmental catastrophes or themes of natural and supernatural evil have never been more current topics. Love for nasty guitar riffs and demented rocking are never out of fashion.

Engineer/mixer Teemu Markkula plays a very important part on the overall sound of the album. Markkula also plays guitar in SEREMONIA‘s live line-up. The album’s lyrics are written by Ilkka Vekka. The music is composed and arranged collectively by everyone in the band.

SEREMONIA‘s first official release was a music video for the song “Rock’n’rollin maailma” (English “World of Rock’n’Roll”). The song and the video directed by Sami Sänpäkkilä caused a bit of a stir in the Finnish music media. Music blogs and discussion forums started arguing about the mysterious new band. A bunch of redundant and unnecessary questions were raised. Is the band serious? Are they true? Are they ironic art-school hipsters? These useless questions are easily answered: Yes, SEREMONIA makes their music with a burning passion, seeking only artistic triumphs and being dead serious about their vision of great rock music. With the first album now in the can, they are getting ready to record more (and more) albums in the future. Take a listen and stay tuned. You may or may not enjoy their brand of ghoulish hard rock. Either way, Seremonia keeps on keepin’ on. 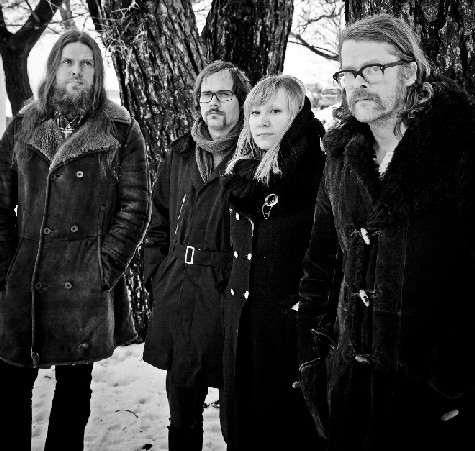