Emanations will see parole via Relapse on May 27th (North America), May 26th  (UK /Europe/World), and May 23 (Germany/Benelux/Finland) on CD, LP and digital formats. A new trailer featuring a sample of the audio, as well as the cover art by in-house Relapse artist Orion Landau and more has been released. View the album trailer here (YouTube) or here (Dailymotion), and preorders for the album can be placed here. 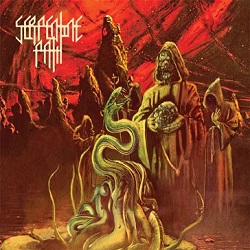 Born from within the smoldering remains of Unearthly Trance in 2011, UT members, bassist Jay Newman, drummer Darren Verni and vocalist Ryan Lipynsky (The Howling Wind) recruited guitarist Tim Bagshaw (ex-Ramesses, ex-Electric Wizard) to complete the SERPENTINE PATH lineup. Their crushing, self-titled debut full-length was referred to as “thudding death-doom that will have genre enthusiasts rolling their stoned skulls in graveyard genuflection” by Revolver, and “a contender for doom album of the year” by Decibel.

Now officially augmented by new second guitarist Stephen Flam, the mastermind behind NYC doom/death legends Winter, SERPENTINE PATH brings forth their most demoralizing and anguish-filled slow-motion chaos yet, with the newly-completed Emanations. As with their first album, Emanations was recorded by the band’s Jay Newman, after which it was honed to devastating perfection at Audiosiege, the album capturing forty-five minutes of true sludge punishment with seven brand new songs from this true underground all-star team. Sure, the pedigree is undeniable, but regardless of their “members of” status, SERPENTINE PATH is one of the most scathing sludge acts on the planet.