In existence since the mid-80’s REVELATION has earned the respect of many bands and fans from all around the world and are often credited with creating the Progressive Doom Metal genre.  They’ve taken the very best sounds of Rush, Black Sabbath, and early Heavy Metal to  create yet another masterpiece amongst a catalog of many with Inner Harbor.  This is quite possibly the band’s most fluid and laid-back release to date.  While the sound is difficult to pinpoint, one can hear classic REVELATION mixed in with a dash of 70’s Italian Progressive Rock.  The music flows through you so smoothly and freely, that you’re going to feel like you’re in a state of deep relaxed meditation.

The combined creative forces of drummer Steve Branagan, guitarist/vocalist John Brenner and bassist Bert Hall Jr. are responsible for over twenty full-length releases – split between REVELATION and their eclectic alter-ego AGAINST NATURE – and countless demos and EPs. Inner Harbor was made available as a digital release last year by the band’s own Bland Hand Records (www.againstnature.us/BH/) and will see worldwide distribution on CD format by Shadow Kingdom Records in April. Pre-orders are being taken at the newly revamped Shadow Kingdom Records Webstore at www.shadowkingdomrecords.com. 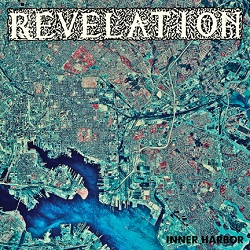 “Inner Harbor finds Revelation as productive and relevant as ever. Long gone is the echo-y crunch of 20 years ago, and in its place is a record proudly recorded in a basement and challenging the very meaning of doom as many people claim to understand it.” -Stereokiller.com