Continuing with its knack for unearthing hidden treasures, Shadow Kingdom Records has announced the October 15 reissues of The Evil in You and Me and Save Yourself from 90s’ Doom Rockers LOST BREED. Both albums have been remastered for maximum sonic power. Shadow Kingdom Records owner Tim McGrogran gives us a little LOST BREED history and the details behind each album.

“Back in the 80s it was fairly common for bands to move to LA to try and make it big. LOST BREED is among the many bands that made that trip from NY to LA. They soon met up with the legendary Scott ‘Wino’ Weinrich, whom at the time had already had two SAINT VITUS records under his belt, was soon to be releasing a third SAINT VITUS record, and was also in the process of restarting THE OBSESSED. Even with all of those irons in the fire, he started writing and jamming with LOST BREED. With his main roots and influence coming from the Maryland Doom Metal scene, it’s no surprise that LOST BREED fits right in there stylistically. With that said, Wino did lay a nice foundation for the band to build and grow from. Wino only appears on their first Demo and doesn’t appear on either album since at some point he probably realized he had too much going on and two bands to focus on were enough. With all of the music out there, it’s going to be a big surprise for people who haven’t heard this band yet. They have extremely unusual songwriting skills that not only make you scratch your head, but also bang your head at the same time. Once the music of LOST BREED settles in, it’s quite the listening experience and after a while you might think to yourself ‘How does something that sounds so complex and disjointed work together so well?’ So, what does this sound like? We’re still trying to figure this out. In short, it just does, but if you’re looking for a reference point, then start with THE OBSESSED and some old SOUNDGARDEN and play both records at the same time. The Evil in You and Me is arguably the first “Doom Rock” album to ever exist. Some might call it ‘Stoner Rock’ (we wouldn’t agree), but whatever it is, it’s pretty groundbreaking.” 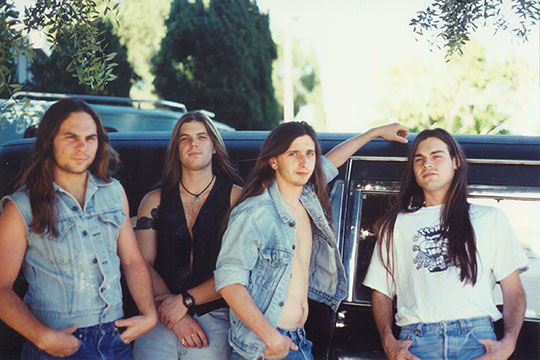 “Save Yourself picks right up where The Evil in You and Me ends. This album is a little more straightforward in the songwriting department, but it still has that quirky charm about it. It’s probably a little more doomy and with that a little more accessible than The Evil in You and Me. Both Save Yourself and The Evil in You and Me are essential and you definitely need both if you like this style of music. These guys might have had a short-lived career, but we probably got the cream of the crop out of them before they called it quits. They were a band that came out at the wrong time when the world wasn’t ready for them. It’s a shame because if they were more well known, they would probably influence a ton of bands. The one thing that’s great about LOST BREED is that this stuff never gets stale. You discover something new with each listen and after years of hearing them, the well of new sounds never runs dry.”

Stream tracks from The Evil in You and Me and Save Yourself at shadowkingdomrecords.bandcamp.com.