For a digital copy and free stream of the album, visit the label’s bandcamp page. Physical copies are available at the Shadow Kingdom Records Webstore.

Shadow Kingdom’s Tim McGrogan had this to say about the album:

“Back in 1982 PAGAN ALTAR released this N.W.O.B.H.M. masterpiece and almost immediately this album went into obscurity. They have been by far the most over looked band in the history of heavy metal music. It’s amazing that they’ve finally pulled it all together for being virtually non-existent for nearly 15 years. They deserve all of the success and recognition they’re getting today and much, much more! In the late 90’s they came out of the woodwork and put this out on their own label and it was mistakenly called “Volume 1”. The extra track was an acoustic track which was just called “Acoustics” at the time. This is the first time this album will be released in all its glory. The correct title “Judgement of the Dead” and updated acoustic song title as well. Also, this is the original artwork that was released back in 1982 which has never been seen before until now! We’ve re-mastered the CD to sonically preserve its antique feel. It comes with a very nice booklet that includes a story and old band photos. If there ever was such a thing as a perfect album, this would be it! There is nothing more satisfying than the sound of this record. If you’ve never heard of this band or album, think of Black Sabbath and Jethro Tull and you’re almost there. They take music to a whole new level.” 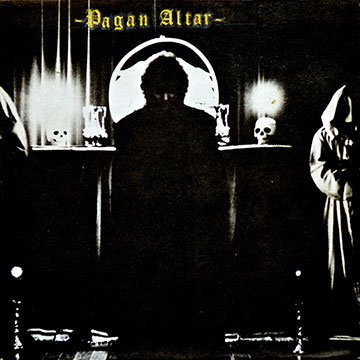 1. Pagan Altar
2. In The Wake Of Armadeus
3. Judgement Of The Dead
4. The Black Mass
5. Night Rider
6. The Dance Of The Banshee
7. Reincarnation

In other news, PAGAN LORD has recently been confirmed for Maryland Death Fest XI, which will take place May 23rd – 26th, 2013 in Baltimore, MD. For for information and updates visitwww.marylanddeathfest.com.

For more on PAGAN ALTAR visit: