Comprised of live recordings, rehearsal tracks and studio cuts – including three more recent songs recorded in 2008 – this collection captures the magic of a band heavily influenced by the New Wave of British Heavy Metal, but somehow fell through the cracks of that burgeoning scene. Shadow Kingdom Records now seeks to turn the unknown into the known with The Lost Legacy.

“It would be a rare case if anyone were even aware of Zone Zero as they only put out one Single and a few demo tapes in the early 80s before disbanding. In the land of early Swedish Heavy Metal, the very first and most important band was without question Heavy Load, who started in the late 70s. With that said, Zone Zero does have a very strong Heavy Load influence and were also influenced by Judas Priest and the New Wave Of British Heavy Metal. There were quite a few bands that popped up in the early 80’s in Europe that could have easily been a part of the N.W.O.B.H.M. but they weren’t because that period of time only included England. This package includes their entire career, which started in 1980 and includes the band re-uniting for 3 brand new songs that were recorded in 2008.”

Stream tracks from The Lost Legacy at: shadowkingdomrecords.bandcamp.com/album/the-lost-legacy 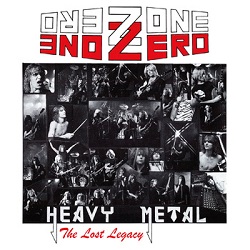