Shadow Kingdom Records has announced that ALTAR OF OBLIVION‘s Grand Gesture of Defiance will be released on September 11, 2012. Label owner Tim McGrogran has this to say about the album:

“ALTAR OF OBLIVION is by far the very best Heavy Metal band to come out of Denmark since MERCYFUL FATE. I wouldn’t say they sound like MERCYFUL FATE all that much apart from their very acrobatic / theatrical vocalist that has a King Diamond-esque style. If you’re looking for an emotional Heavy Metal ride, look no further than this band, they reach for the sky and touch the soul on so many different levels. The style is still very similar to their first album which is a blend of Doom Metal like CANDLEMASS and catchy machine gun riffing with big choruses and memorable songs. Old fans will not be disappointed, new fans will be floored. ALTAR OF OBLIVION deliver another masterpiece!”

Stream the album cut “The Graveyard of Broken Dreams” at this location. 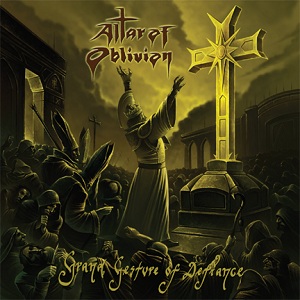 1. Where Darkness Is Light
2. The Graveyard Of Broken Dreams
3. In The Shadow Of The Gallows
4. The Smoke-Filled Room
5. Sentenced In Absentia
6. Final Perfection

ALTAR OF OBLIVION were formed in 2005 and play epic Doom Metal. The band thrives on tragedies of war and captures the spirit and atmosphere of this underrated genre in a compelling and credible manner. Like skeletons walking a burning tightrope, this Danish act perfectly holds and strikes a balance between sinister Doom Metal and catchy 80s Heavy Metal.