From Hell’s deepest abyss comes a new alliance, forged in blood-soaked blasphemy and proclaiming a return to the old ways! On Cryptic Communications, Pennsylvania’s SHADOWS IN THE CRYPT summon the deepest demons hidden within the Earth with nine hymns to the goat, announcing his vengeance upon the minions of the Nazarene. Featuring George Loveland (Decieverion, ex-Crucifier, ex-Invasive Command) on vocals, Stephen Corridean (ex-Evil Divine, ex-Wykked Wytch) on guitars/bass and master shredder Lawrence Wallace! Supreme Black Metal for fans of Horna, Obtained Enslavement, Emperor.

Listen to album cut “Embracing the Forbidden Arts” at this location. 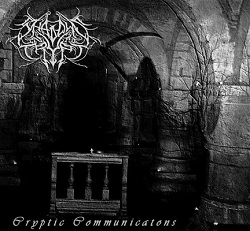 Shadows in the Crypt was formed by Lawrence Wallace in late 2009. Initially, Lawrence Wallace started the group as a recording outlet for the Studio that he was to create (Halo Studios) and recruited many members from the fledgling Delaware/Philadelphia scene to carry out his vision. After having recorded the basic tracks for the first CD (Beyond the Grave) Lawrence settled with vocalist Christian Simms to carry out session duties and hence, Shadows in the Crypt’s first CD was released independently in the summer of 2011. Lawrence then decided to gather members for live shows. After lukewarm reviews for Beyond the Grave and many members resigning before any live shows, Lawrence decided to take a new direction and find members who were seasoned in the Black Metal genre.

In early 2011 Lawrence Wallace recruited Stephen Corridean formerly of Philadelphia’s Evil Divine on bass, Jesse Beahler and James Dorton of local group Nightfire. The next phase of Shadows in the Crypt was complete and the group began sessions for the second CD. Shadows had recorded the tracks for the new CD and partook in some local gigs. During this period tensions grew between members concerning the new musical direction going as far as some members striking against the direction by not showing up for gigs and such. Two gigs had passed and the CD was almost complete with the exception of vocals and yet once again Lawrence was forced to tread other waters to find members in earnest.

2012 was the year that Shadows in the Crypt took it’s current form. Lawrence recruited George Loveland of Decieverion, Crucifier and Invasive Command and the new CD was promptly finished entitled Cryptic Communications. The group was then quickly snatched by Philadelphia label Horror Pain Gore Death Productions and July 3rd, 2012 was the release date for
Cryptic Communications.

Now to the present… Shadows in the Crypt is organizing shows in Philadelphia with the true members. The group is also planning a winter tour and are ambitious with a new EP release in late winter. Two CDs and two promotional demos are added to the group’s resume (Division of the Soul, Baphomental Affliction) and they show no sign of slowing down. Dark, competent and controversial, Shadows in the Crypt are clearly a force to be reckoned with.