IRON BONEHEAD PRODUCTIONS announces December 24th as the international release date for שְׁאוֹל (SHEOL)’s Sepulchral Ruins Below The Temple 12″ MLP. As has lately become the label’s forte, IRON BONEHEAD PRODUCTIONS unveils another new horde that will soon be taking the death metal underground by storm: שְׁאוֹל (SHEOL), which means “grave” or “abode of the dead” in Hebrew. An apt descriptor of the miasmic madness at hand across their debut 12″ MLP, the aptly titled Sepulchral Ruins Below The Temple displays the duo of A.B.S. (vocals, guitar, bass) and A.H.S. (drums, guitar) as masters of burly, shapeshifting, and absolutely gutted DEATH-fucking-METAL diabolism. Nodding to the ancient cults of the early ’90s whilst never once whiffing of “retro” retread, שְׁאוֹל defy and then redefine what morbidity means in the Metal of Death, imbuing their creations with a thorough understanding of the occult as well a spirituality that aims for the otherworld. CD version to be released imminently by INVICTUS PRODUCTIONS. 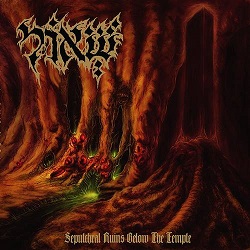