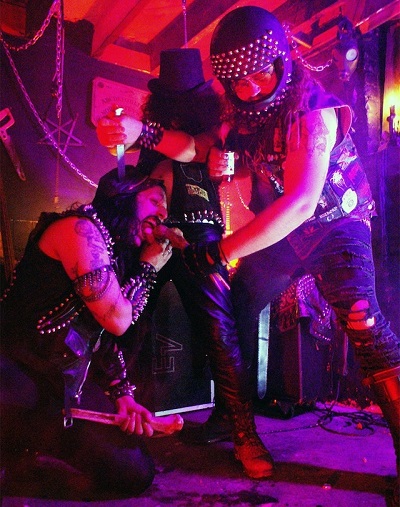 SHITFUCKER announce the tracklisting and cover for their highly anticipated debut album, Suck Cocks in Hell, set for international release on October 31st through HELLS HEADBANGERS on both CD and LP formats. An alternate cover has been made for Germany, with the following explanation: “Warning: Due to German law, under criminal code Strafgesetzbuch 86a, the original artwork for this album depicting the Shiswastifa has been banned in Deutschland. This has resulted in a different cover for the European audience. Listen at your own discretion.” Covers for both the respective regular and German editions, as well as tracklisting, are as follows: 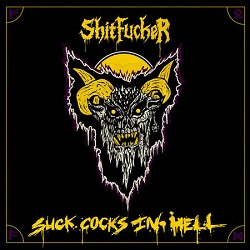 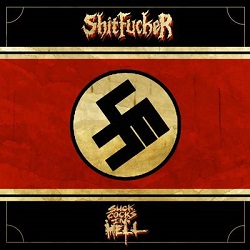 One of the metal underground’s best-kept secrets, Detroit scum-crew SHITFUCKER have finally delivered a full-length of filth after a prolific slew/spew of EPs and demos, under the fuck-off-tourists title of Suck Cocks in Hell. A power-trio in the grand tradition of early SODOM, VENOM, and MOTORHEAD, the three nuclear zombies of SHITFUCKER gnarl together ancient blackthrash and toxic hardcore-punk into a blown-out brew bubbling over with disease, degradation, and devil worship.Bow before apocalyptic witching metal of the highest order/odor: this is SHITFUCKER’s Suck Cocks in Hell! And just recently, Noisey by VICE premiered SHITFUCKER’s “Sex Dungeon,” which can be heard exclusively here: http://noisey.vice.com/en_uk/blog/shitfucker