Milwaukee, Wisc., extreme metal entity SHROUD OF DESPONDENCY has given release to the multifaceted, double-album journey into the abyss called Tied to a Dying Animal.

The album is available on CD and digital formats at the link below: shroudofdespondency.bandcamp.com/album/tied-to-a-dying-animal-3

Always prolific, creative, and fiercely independent, SHROUD OF DESPONDENCY have outdone themselves this time. While 2012’s Pine and 2011’s Dark Meditations in Monastic Seclusion were very well received as black metal albums, Tied to a Dying Animal is a more expansive beast. The heavy metal songs are heavier and more violent while the acoustic songs are more dramatic and enveloping. Tied to a Dying Animal was born out of the desire to find commonality in these seemingly different styles of music.

What better way to exaggerate that commonality than with an absorbing double album, inclusive of four bonus tracks? 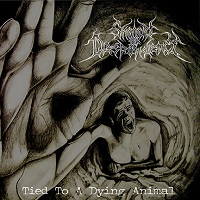 Part 1: “For Innocence, Beauty, and Those Who Defile” is the metal portion recorded at Howl Street Recordings by Shane Hochstetler. Here a variety of metal sub-genres can be heard. Influences of Black Metal (EMPEROR and ENSLAVED), Death Metal (IMMOLATION, MORBID ANGEL, and BOLT THROWER), Thrash Metal (SLAYER, MEGADETH) can be heard alongside MERCYFUL FATE or ROOT. Some KING CRIMSON influence can even be heard.

Part 2: “For Those Who Leave and Find Better Devils”, is an acoustic affair recorded across three studios. Neo Classical acoustic guitar instrumentals and American Folk music are both on display along with a variety of percussive instruments, vocals, synths, and even a Theremin. The only rule that applies to both albums is that they explore the despair and alienation of city life. Each set of lyrics has a character struggling to reconcile moral urges with the natural savagery of human existence, a conflict exasperated by the constant motion of civilization. Each song pits the individual against the group.

For a more intimate exploration of lyrical themes and inspiration, a detailed explanation of all the friends and musicians who helped with the effort, and to stream Parts 1 and 2 of Tied to a Dying Animal in full please visit shroudofdespondency.bandcamp.com.

Hot News: Shroud Of Despondency to Release ‘Tied to a Dying Animal’ February 12