Costa Rica’s finest musical export is ready to take on the world! SIGHT OF EMPTINESS has been hard at work towards making an impact on the global metal scene since the release of ‘Trust Is A Disease’ in 2007 – the same year the band won the Bloodstock Unsigned Contest and played the mainstage of Bloodstock Open Air.

Since then, SIGHT OF EMPTINESS has been hard at work. Releasing another album independently in 2009 and supporting heavyweights such as Megadeth, At The Gates, Obituary and more — even playing national concerts for the Costa Rican government to over 15,000 people and being invited back to play Bloodstock Open Air in 2012, without entering a contest.

The band’s hard work culminates now, as they prepare to unleash their third full length album ‘Instincts’ on January 21st! 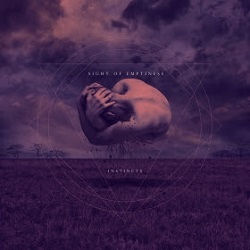 ‘Instincts‘ is a heavy-hitting dose of melodic death metal that will hit home with fans of Amon Amarth, At The Gates, In Flames and the like. It is also a very targeted effort to reach the worldwide metal masses. Produced by  Thomas “Plec” Johansson (Watain, Scar Symmetry, etc), ‘Instincts‘ features a who’s who of incredible musicians guesting on the album. Tracks featuring Glen Drover (Megadeth, King Diamond), Ralph Santolla (Deicide, Iced Earth), Christian Alvestam (Scar Symmetry) and Whitfield Crane (Ugly Kid Joe) make the album standout on looks alone, but the songs themselves will have fans coming back for more!

Not only have SIGHT OF EMPTINESS caught the attention of their peers, but also the Costa Rican government as ‘Instincts‘ also features a guest appearance of Manuel Obregon, the Minister of Culture & Youth for Costa Rica’s government.

To get your first tastes of ‘Instincts‘, check out the first video from the album for the track “Essence (featuring Whitfield Crane of Ugly Kid Joe)” at the following location: http://youtu.be/Qp1IzSohyv4?hd=1