Moravian folk metal band and two times winners of Czech grammy award SILENT STREAM OF GODLESS ELEGY have just released a new live video featuring a performance of a song taken from their most recent album “Návaz” called “Dva stíny mám” (“I Have Two Shadows”) at Masters Of Rock Festival 2013. The clip is exclusively streaming with the following offical media partners now:

“Návaz” is out on Season of Mist and can be ordered here. Find artwork and track list below. 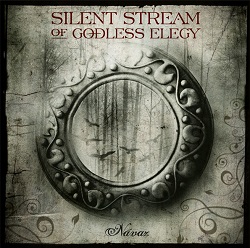 Ever since the band emerged from Hranice in Moravia, deep within the Slavonic heartlands, in 1995, SILENT STREAM OF GODLESS ELEGY have been at the forefront of folk metal. Raised beyond the ordinary by Hanka Hajdová’s warm and clear female vocals (that find their natural counterpoint in Pavel Hrnčíř’s strong male voice), this engaging octet are ready to take on the world, staking their claim as pioneers of the folk metal genre.

Updated SILENT STREAM OF GODLESS ELEGY news and tour information will be available through the Season of Mist website, and the band’s website and Facebook page.