Philadelphia based Metallers Single Bullet Theory have quite a busy next few months ahead of them. In the midst of writing and recording theri next full length offering, The band will be hitting the road in August as part of the “North American Devastation” tour along side Into Eternity and Riksha. Matt DiFabio offers some insight below.

“Well, I have compiled about fourteen songs for the next record and our drummer, Nick (Bunczk) and I have been working on the new material pretty diligently to get a large portion of it ready before we hit the road. It’s been pretty refreshing working on arrangements and little extras for each of these songs; I’d say its pretty consistent with the SBT sound. Some may say that that might be considered a little inconsistent considering the vast amount of influences we have and that i am not afraid to wear em on my sleeve. Regardless, the new record is pretty damn heavy with a good dose of melody thrown in for good measure.”

“Working with Nick is a breath of fresh air. His drumming and general musicians ship is completely off the charts so to hear these songs come to life with him behind the kit… well, its really inspiring. Also, for the first time in almost 13 years, there is a collaborative effort for a track. Our guitarist, Joe Brannigan, had some KILLER riffs floating around in his noggin. He came up to the house last week and we were able to get them scratch tracked and compiled into a completely new piece of music. It’s very heavy and kinda reminds me of something that would have been done on the Nevermore Dreaming Neon Black record. I have a serious pool of talent to pull from on the next record and I intend to utilize everyone’s strengths accordingly. On the last SBT ,IV, we had a blazing lead guitarist and a great drummer to record with but I knew that we would never have those exact guys live. With this new record I have even more of a blazing lead guitarist in Pat Brose and an even better drummer with Nick Bunczk. What’s better yet is that I know we will be able to pull these new songs off live without a hitch.”

“Our intention is to come off the “North American Devastation” tour and go immediately into the studio. I don’t want to fuck around and lose momentum so the plan is to do a few of the new songs live for the tour and continue getting all the little shit written and prepared for an immediate recording session.”

“Regarding who will be putting the new record out…. We officially are no longer with Goomba music. I should have gone with my gut feeling and NOT given the IV record over to them to begin with. I worked really hard (as did John Ruszin) on getting IV to be a pretty massive record and for it to have withered on the vine just does not sit well in any way with me. We shot a video that wasn’t worked, we delivered a master that wasn’t really promoted. There is no metal radio campaign…. Really a big let down. It’s a shame because I like the guys at Goomba and have been with them for almost ten years if you consider my time with Crash Music, as the labels have the same owner. Regardless, we have been in negotiations with a label with whom I have had relations with since the mid 90’s. I believe that, in hindsight, we should have stuck with the original game plan back before we released IV and went with them then.

“The cover art is already done for the new record and despite it previously being slated as being titled The Divine Ways of Chaos, the record is actually going to be self titled as I feel that this record and this line up really encompasses what SBT really is. We also have a brand new video that we just shot for “Edge of Broken” that will be a bonus song on the next record. “Edge of Broken” is an older, unreleased song that we re-worked and are very happy with.”

“Regarding the upcoming tour dates…. I am soooo stoked to get back out on the road again. We haven’t REALLY toured since 2005 and our last tour was actually with Into Eternity. For us to get back out there with Tim and Troy (Into Eternity) seven years later; it’s really exciting. Into Eternity is one of my favorite bands and I am gonna be honored to share the stage with them again after all this time.”

A promo video for Single Bullet Theory‘s upcoming tour has been posted at this location.

w/ Into Eternity and Riksha: 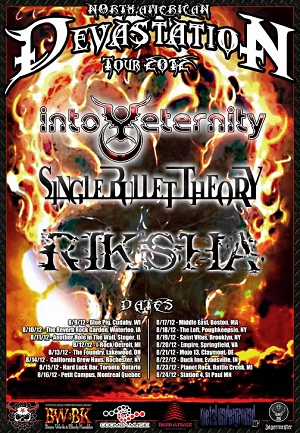 Check out Single Bullet Theory in action from April of this year, playing “Diabolical” at Tango in Philadelphia. The video is posted HERE.