SINISTER are going to release a new album next month!

“The Post-Apocalyptic Servant” is a concept album and SINISTER came up with 10 unprecedented brutal, heavy and very modern sounding master pieces of death metal.
All written without ever forgetting their old-school roots and all excellently produced by Jörg Uken from the Soundlodge Studio.

Expect catchy guitar parts, killer solos, supreme drums and an awesome bass! For the vocals … listen for yourself, but even the great grunters are no competition! 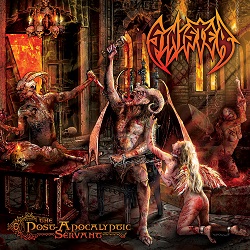 Mike Hrubovcak (visualdarkness.com) is once again responsible for the sick cover artwork!

You can now listen to the brand new song “The Burden Of Mayhem” in its entirety on http://youtu.be/LyT0B1gazfY

The new album will also be available as limited edition digipak with three exclusive bonus tracks as well as a video clip.

SINISTER’s new album “The Post-Apocalyptic Servant” will be released on May 23, 2014 via Massacre Records!

SINISTER – Deformation Of The Holy Realm