Pennsylvania traditional metallists Sinister Realm are scheduled to release their third album World of Evil via Shadow Kingdom Records early this summer. Album artwork and track listing can be viewed below.

Commenting on the album artwork, bass player and founding member John Gaffney had this to say:  “I wanted to do something different from our past album covers which used photos and I really wanted it to embody the feel and mood of the songs. I was lucky to get in touch with a great upcoming artist from Portugal named Augusto Peixoto at Iron Doom Design and he was able to bring my vision for the album cover to life.” 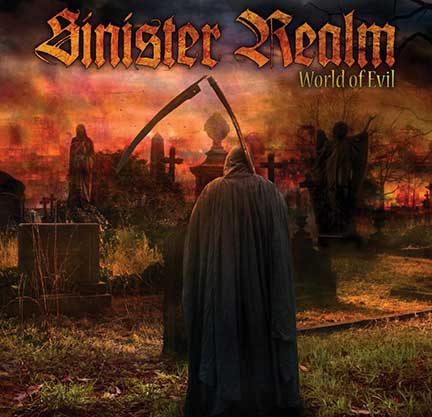 With influences ranging from Iron Maiden, Judas Priest, Black Sabbath, Candlemass and Dio, World of Evil will find the band moving in an even darker more epic direction.  Comments Gaffney, “Many of the songs on the album focus on the evil that man brings to this world, with wars, lies and the dark future that sometimes seems ahead of us.”  Plans are being assembled for the band to hit the road later this year in support of the album.

In other news Sinister Realm contributed their version of the Anvil classic Forged in Fire to the album Strong as Steel- A Tribute to Anvil set for release on April 19th on Skol Records, the song can be heard below. John Gaffney had this to say about covering the Anvil classic, “Anvil is the sound of Metal, plain and simple. The jackhammer riffs and Robb’s pounding drums, it doesn’t get much cooler than that! Being a fan of darker sounding riffs and songs with cool drum parts “Forged in Fire” has always been one of my favorite Anvil songs, I hope we do it some justice and maybe even add an extra sinister edge to it….love live heavy metal and long live Anvil! Stream “Forged in Fire” HERE.