French death metal cult SKELETHAL premiere the new track “Death Returns” at Terrorizer magazine’s website. The track hails from the band’s forthcoming debut MLP, Deathmanicvs Revelation, set for international release on April 21st via IRON BONEHEAD PRODUCTIONS sets. As SKELETHAL‘s opening statement, Deathmanicvs Revelation says everything it needs to in its title: absolute DEATH WORSHIP, wielding the Metal of Death like a scythe, an axe, and blunt hammer simultaneously, all in obeisance to occult forces beyond the mien of man. At 22 lean, licentious minutes, Deathmanicvs Revelation allows this French duo to gallop forth into – and beyond – the realms of death, utilizing a morbid, miasmic thrust and an execution that sounds utterly possessed. Despite their young years, SKELETHAL are well learned in the ancient ways of death metal, and the resultant sound across Deathmanicvs Revelation is not so much “old school” nor “retro” as it is simply respectful of its traditions, adding their own hideous flair to the form. First evidence of this fact can be heard exclusively HERE. 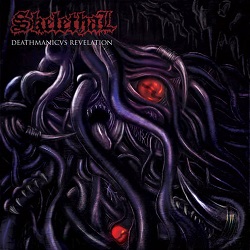