SKINNER was formed from the fallout of the now defunct Power\Thrash band Imagika. Throughout the band’s history Imagika released 7 albums total worldwide and toured extensively before calling it a day in 2010. Taking its name from their lead vocalist; SKINNER combines both the European Power Metal sound with the high energy Thrash Attack of the SF Bay Area.

The video “Sleepwalkers” was directed by Mike Sloat (Testament\Machine Head) and depicts a struggle between two consciences. The first is a dream world where the individual sleepwalks through life doing as they are told completely unaware of the reality around them. The second is the horrible reality that not everything is as it seems and life can be hard and scary. The individual eventually is able to break free of the mold and think for himself.

CD artwork courtesy of Jobert Mello of Sledgehammer Graphix can be seen below. Jobert has created artwork for bands such as Primal Fear, Sabaton, Shadowside & more. 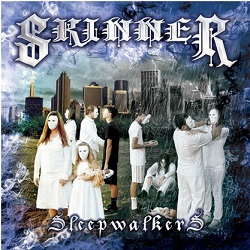 Writing is well underway for SKINNER’s follow-up release. The band plans to begin recording this Fall.