DARKTHRONE knew very well what they were talking about when the composed the anthem „Canadian metal“ a few years back – pure steel grows in the land of maple syrup and raccoons!!! SKULL FIST give us proof for that theory with their unadulterated and unabashed heavy metal. Is there anybody out there who could ever forget a smasher like “No false metal”? There you go.

Since these young Canadians scored the Rock The Nation Award in 2010, the career of singer Jackie Slaughter and his gang has skyrocketed: their debut “Head öf the pack” has been unleashed on the hungry metal masses by NoiseArt Records August 26, 2011 and collected rave reviews worldwide. SKULL FIST went on tour with BULLET, ENFORCER, SABATON and POWERWOLF and were greeted everywhere by ravished merch tables, raised fists and thousands of new fans!!!

So SKULL FIST have escaped the underground scene for good, and now it`s time to finally claim the throne of metal! Their weapons? Authenticity, 80s spirit and classic metal tunes with singalong character – enter “Chasing the dream” which will be released in January, 2014!

“It`s what you`ve always been waiting for!“, tells us vocalist Jackie Slaughter. “It has new songs. And a different cover. It was recorded at a different studio. It has new guitar solos, and new rhythms. And new bass parts. And new drums. And new lyrics, and different girlish screams. And strange new dead cat vocals.”

Thank you, Jackie! What the illustruous frontman is trying to say is that SKULL FIST didn`t bother with experiments, but instead opted once more to deliver timeless heavy metal that is perfect for every headbanger`s party. The band recorded at the Vespa Studios in Toronto: “It`s actually owned by the bro who sang in HAREM SCAREM back in the early 90s! Totally right on. Harry Hess is his name. The album was mixed and mastered by Eric Ratz. We`re doing the vocals at Lenz Studios with the same guy that did the last album actually, Dan Tsourounis.”

The Canadian jokster explains the near 3-year break in between „Head öf the pack“ and „Chasing the dream“ as follows: “Money doesn`t grow on trees apparently. We didn`t have enough moula when we originally planned to record, so we pushed it back 2 months and then one month later I selfishly decided to break my neck skateboarding which put us out for another 2 months.”

Quite the metal explanation – apology accepted! And finally a tiny glimpse at the lyrical concept of the album: “The theme is Shakespeare. Act II.“ 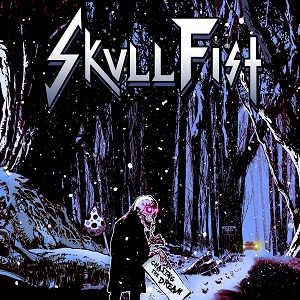 The album will be released as follows via NoiseArt Records and will be available as CD, Gatefold-Vinyl in different colors and download: