After three years of silence and much speculation Norwegian Black Metallers SLAGMAUR are back in the studio and are currently putting the finishing touches to the follow up to 2009’s “Von Rov Shelter”. The new six-track full-length album, which the band has been working on for three years, will have the title of “Thill Smitts Terror”and is expected to be completed in the spring for release later this year. A label is currently being sought. A pre-production version of the “Drummer of Tedworth”, a track from the album can be heard on the band’s SoundCloud page at http://soundcloud.com/slagmaur/slagmaur-the-drummer-of

“Thill Smitts Terror” will continue where “Von Rov Shelter” left off, delving more and more deeply into the disturbing world that SLAGMAUR conjures up by combining modern and classical instruments with children’s nursery rhymes and fairy tales. It is a world where classically constructed melodies blend seamlessly with aggressive black metal to create a nightmare scenario straight from the pit of hell. 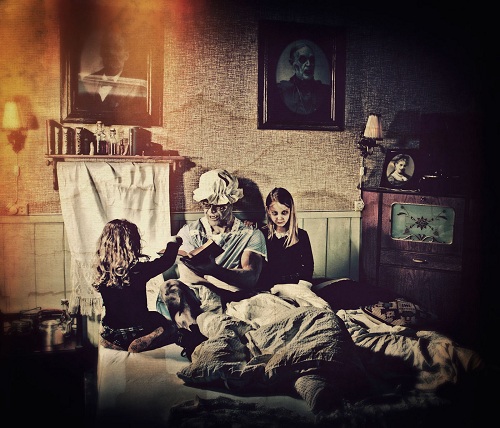 All artwork for the album is by the band’s founder General Gribbsphiiser (guitars, bass, cello, keys) and, according to the band’s manager, art, as well as music, is an integral part of the whole that is SLAGMAUR. Each individual part of the artwork that will be used on the album will also be available separately as limited editions stand-alone pieces of art, samples of which can be seen on the band’s Facebook page at https://www.facebook.com/slagmaurofficial. Anyone wishing for more information about the artwork should contact kriger88@hotmail.com

Mysterious and secretive, SLAGMAUR was formed in the remote reaches of North Western Norway, in 2006. The band have never revealed their true identities, always appearing heavily costumed and disguised. Nor have they ever revealed how they create the sinister music that invades the listeners mind with layer upon layer of sound, revealing a different facet each time depending on the listener’s current mood. “Thill Smitts Terror” sees Gribbsphiiser himself take on vocal vocal duties following the death of Steingrim and the departure of Åtselgribb. Wardr (drums, keys) has also left the band to pursue other projects, but remains an honorary member, and is replaced by Dominaus Kracker who hails from the band’s home island of Fosen, and had previously contributed to “Von Rov Shelter” and worked on the production side of MARE. Guest appearances by musicians from Fosen and Nidaros will also be featured.

The Official video for the track “Klokker Tramp” from SLAGMAUR’s album “Von Rov Shelter”, which includes an especially composed tribute to Steingrim, can be seen at http://youtu.be/F49BG4AvgyI